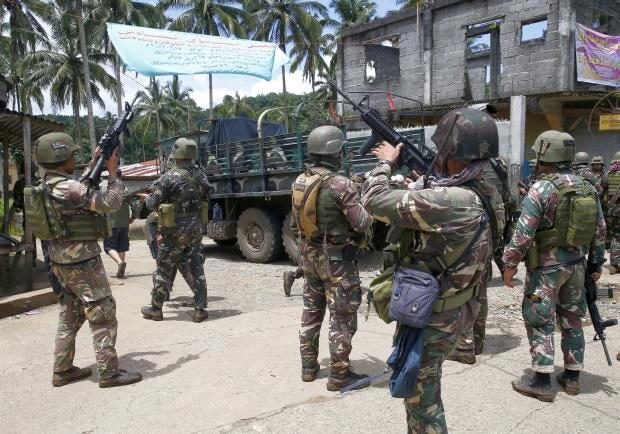 In this photo, taken May 30, 2017, government troops prepare to head to the frontline in the fight against Muslim militants in Marawi City. (PHOTO by BULLIT MARQUEZ / AP)

Seven hostages were rescued by government troops in Marawi City, the military said on Tuesday.

“Troops have rescued seven hostages and they are having a debriefing,” Joint Task Force Marawi spokesperson Lt. Col. Jo-Ar Herrera said in a televised press briefing.

Fighting between government troops and the ISIS-linked terrorists continued to rage for a month now. The government forces had 70 deaths since the fighting broke out on May 23.

The military said nearly 300 terrorists had been killed, including foreign fighters.

Thousands of residents have also been displaced, some sought refuge in the closest provinces including Iligan City.

Herrera also said that the hostages, who were rescued after being held for about three weeks, have seen Father Chito Suganob, vicar general of the prelature of Marawi, very much alive.

Terrorists have offered to free Suganob in exchange for releasing the parents of the Maute brothers arrested by authorities on separate occasions early this month.

The government, however, rejected the offer, saying that they don’t negotiate with terrorists. Frances Mangosing/JPV/rga