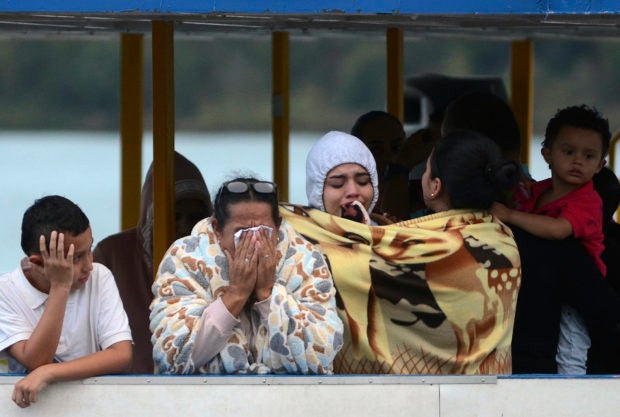 People who survived a sunken ferry, cry as they wait for more information about their missing friends and relatives, at a reservoir in Guatape, Colombia, Sunday, June 25, 2017. Nine people were dead and 28 missing after a tourist ferry packed with around 170 passengers for the holiday weekend capsized Sunday on a reservoir near the Colombian city of Medellin. (Photo by LUIS BENAVIDES / AP)

GUATAPE, Colombia — Scuba divers on Monday continued searching for bodies in a reservoir near the Colombian city of Medellin where a tourist boat packed with more than 150 passengers for the holiday weekend capsized, leaving at least six people dead and 15 missing.

Rescuers including firefighters and air force pilots in helicopters searched for survivors at the Guatape reservoir where El Almirante ferry sank. A flotilla of recreational boats and jet skis had rushed to the scene, pulling people from the boat as it went down and avoiding an even deadlier tragedy.

Dramatic videos circulating on social media show the turquoise-and-yellow-trimmed party boat rocking back and forth as people crawled down from a fourth-deck roof as it sank in a matter of minutes. Survivors described hearing a loud explosion near the men’s bathroom that knocked out power a few minutes after the boat began its cruise around the giant lake. As water flooded on board, pressure built and people were sucked under by the sinking ship.

“Those on the first and second decks sank immediately,” survivor Lorena Salazar told local media. “All we could do was scream and call for help….it was completely chaotic.”

In the absence of a passenger list, authorities have been relying on family numbers and survivors to report their whereabouts. Overnight they reduced to 15 the number of people missing, down from an earlier count of twice that amount. Of the 134 people who survived the crash, three remain hospitalized but are out of danger, said Margarita Moncada, the head of the disaster relief agency in Antioquia state.

A group of 25 scuba divers had to suspend their search overnight due to a lightning storm. But they resumed their work before dawn Monday in hour-long shifts, looking to sweep for trapped bodies in the frigid, algae-filled waters around the wreckage at a depth of over 30 meters (100 feet). Moncada said the hardest part for scuba divers is to safely search the area around the first deck of the boat.

It’s unclear what caused the boat to sink.

Some survivors and people who witnessed the tragedy unfold from the nearby shore said the boat appeared to be overloaded. But President Juan Manuel Santos, who traveled to Guatape to oversee search efforts, said it was sailing well below capacity. None of the passengers was wearing a life vest.

“Nobody really knows what happened,” said Santos, adding that naval officials were brought in to carry out an investigation.

The reservoir surrounding the soaring rocky outcrop of El Peñol is a popular weekend destination a little more than an hour from Medellin. It was especially busy Sunday as Colombians celebrated a long holiday weekend.

Carlos Espinosa, an independent journalist from Guatape, said a few months ago townspeople awoke to find the El Almirante filled with water and sinking at its dock, suggesting that perhaps the vessel wasn’t ready to return to the water.

“What makes you angry is there are no controls by the government,” he said.

As night fell, the usually festive town was silent as people began to register the magnitude of the loss. Among those huddled under the rain near the port looking for information about loved ones was Alberto Villegas, who was separated from a cousin and uncle in the mad rush to abandon the sinking ship.

“All we ask is that they don’t give up the search,” said Villegas.