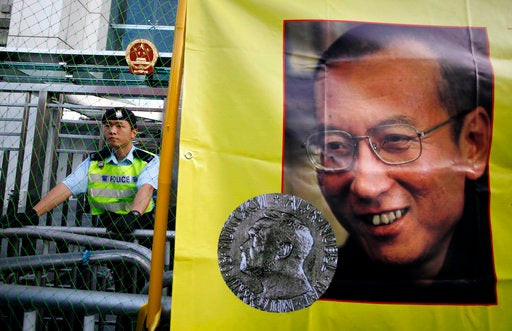 Liu was in stable condition at the China Medical University No. 1 Affiliated Hospital in the northeastern city of Shenyang, his lawyer Mo Shaoping told The Associated Press. Liu was diagnosed on May 23, Mo said.

It was not immediately clear if Liu was being allowed visitations.

Liu, China’s best-known political prisoner, was sentenced to 11 years in prison after being convicted of inciting state subversion in 2009 for writing and disseminating Charter ’08, a document calling for democracy.

The following year, he was awarded the Nobel Peace Prize by the Norway-based Nobel committee, a move that has greatly angered the Chinese government. In April, Beijing normalized its relations with Oslo after a six-year hiatus.

“It’s known that Liu Xiaobo and his family have made a tremendous sacrifice for the cause of freedom and democracy for China,” said Shanghai-based legal scholar and human rights activist Zhang Xuezhong. “This is unfortunate news for him and his family, and it’s a blow to China’s democracy movement, as so many people have placed hope in him, and rightfully so.”

Without further information on Liu’s medical condition, Zhang said that no effort should be spared to treat Liu, and that his family must be fully informed of his treatment plans. “His life is so important that I think he should get the best possible treatment with full knowledge of his family, even if it means some compromises” with the government, Zhang said.

Geng Shuang, a spokesman for China’s foreign ministry, said he was not aware of the latest development in Liu’s case.