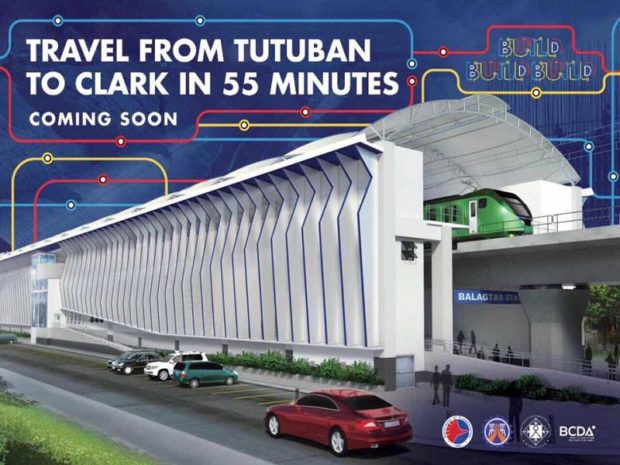 An illustration of how a station in the Manila-Clark Railway will look. (RADYO INQUIRER FILE PHOTO)

MANILA — The Department of Transportation (DOTr) leads on Monday (June 26) the marking of five future stations of the Manila-Clark Railway Project, the line that will connect Manila to Central Luzon.

Transportation Secretary Arthur Tugade will lead other government officials in the marking ceremony for the five of the 17 stations: Marilao and Meycauayan in Bulacan, and Valenzuela, Caloocan, and Tutuban in Metro Manila.

The 106-kilometer railway project, running from Tutuban in Manila to the Clark freeport zone in Pampanga is among the “high-impact” projects of President Duterte under the government’s “Build Build Build” infrastructure program, according to the DOTr.

The department said the rail project, once completed, would cut down the two-hour travel time from Manila to Clark to just 55 minutes. The rail system will also benefit 350,000 passengers daily on its first year of operations.

The project costs P255 billion and will be funded through the Official Development Assistance (ODA) from Japan.

The whole line will have 13 train sets with eight cars or coaches per train set. Each train can reach a maximum speed of 120 km per hour.

“This project will ease traffic congestion and help thousands of commuters coming from Bulacan and Pampanga who travel daily to their workplaces or schools in Metro Manila,” Magno added.