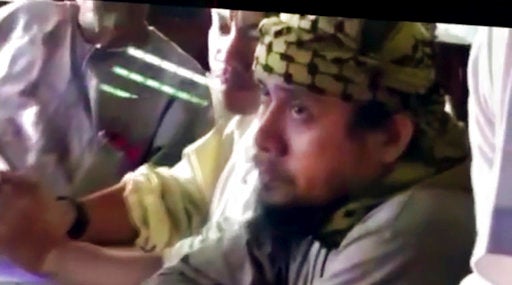 This image taken from an undated video shown to The Associated Press by the Philippine military shows the purported leader of the Islamic State group Southeast Asia branch, Isnilon Hapilon, center, at a meeting of militants at an undisclosed location. The images offer a rare glimpse into the clandestine operations of insurgents who followed through two weeks ago with an unprecedented assault on the lakeside city of Marawi, parts of which they still occupy today. (Philippines Military via AP)

MARAWI CITY – The military said it has received reports that Abu Sayyaf leader Isnilon Hapilon might have already escaped from the city but made it clear that none of these reports had been verified yet.

“Yes we have received reports pertaining to this issue, of the possible escape of (Isnilon) Hapilon but as I said, these are all for validation,” Lt. Col. Jo-ar Herrera, the spokesperson of the Philippine Army’s 1st Infantry Division, said.

Herrera said he could not provide any specific information about Hapilon’s purported escape but he said the military had taken the reports seriously.

“Our take is that there are reports that came out. He had not been heard of nor monitored commanding his men (lately). There are reports he is no longer in the conflict zone,” he said.

But Herrera said as far as the military was concerned, these reports have not been verified.

“That’s why we strive to verify,” he added.

“We are monitoring the whereabouts of terrorist leaders. Abdullah (Maute) is still there. We have a process in terms of validation and verification of reports,” Herrera said.

He said despite these reports, the military continued to secure the area and has deployed forces in all possible exit and entry points of the city.

“That’s why we strive to validate (reports), double check, triple check, so we could provide verified data,” Herrera added.  SFM