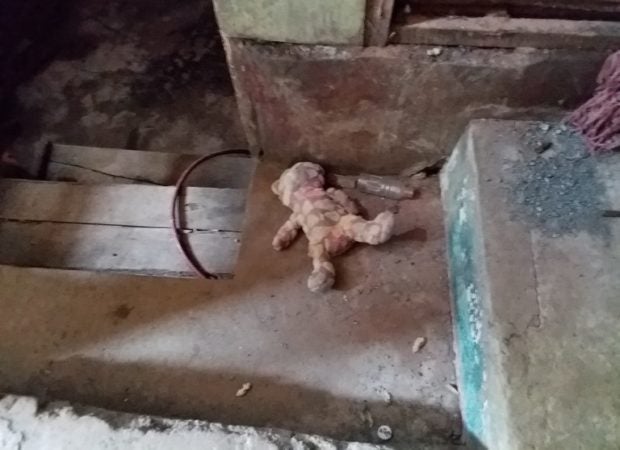 This photo taken on June 22, 2017 shows a teddy bear outside an abandoned house near the frontline in Marawi on the southern island of Mindanao, as fighting between government troops and Islamist militants enters its fourth week.
Nearly all of the 200,000 residents of Marawi have fled since hundreds of gunmen linked to the Islamic State (IS) group went on a rampage on May 23, triggering a conflict that has destroyed entire districts and left the others vulnerable to looting. AFP

However, the sixth to be rescued, a 74-year-old man, had died before rescuers had arrived.

The elderly man, identified as Hassan Ali, had suffered a stroke weeks ago, a member of the peace corridor said.

It was not immediately known when Ali had exactly died.

Peace Assistant Secretary Dickson Hermoso said the rescuers risked their lives and plucked out the trapped civilians amid the gunfire.

“One of our rescuers was nearly harmed. A bullet hit his pants,” Hermoso said.

He said more rescue operations would be carried out in the next few days – depending on the situation.

At least 100 civilians were still believed to be trapped in the war zone, including hostages being held by the Maute gunmen, Lt. Col. Jo-ar Herrera, the spokesperson of the Army’s 1st Infantry Division.

He said the eight-hour ceasefire declared by the military, which started 6 a.m. Sunday, was also aimed at the rescue of more trapped civilians.

The ceasefire ended 2 p.m. and automatic rifle and machine gun fire, along with mortar round explosions, immediately resumed.

A military officer said the Maute gunmen started firing their guns shortly after the original ceasefire ended – which the military tried to extend by two hours to allow rescuers more room to do their job.

As media men awaited rescuers, who went into the battle zone to pluck out trapped civilians amid the ceasefire, the gunfire and explosions started around 2 p.m.

Journalists covering the rescue operation, soldiers and other civilian members of the Lanao del Sur provincial rescue team, also had to run for cover when bullets started reaching their position – just a few meters past the Amai Pakpak Medical Center.

The area that the stray bullet reached was supposed to be a “clearedarea” already, including the nearby Agus I hydroplant.  SFM