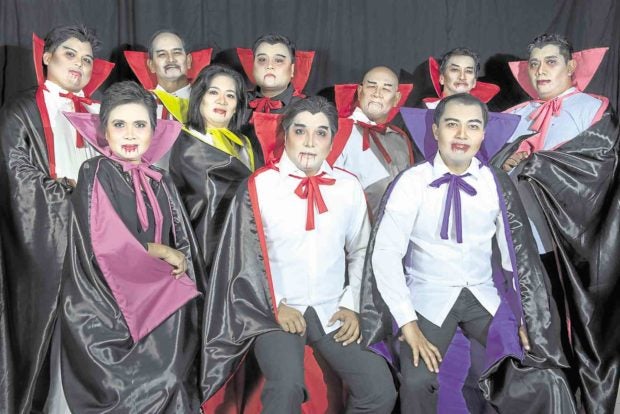 THERE WILL BE BLOOD, bags and bags of it. Or so hope these Binalonan, Pangasinan, officials led by Mayor Ramon Guico III (center,front row, and right photo) who dressed up as vampires to invite donors to the town’s blood drive on June 28. The online video appeal with its “vampire” cast has gone viral. —CONTRIBUTED PHOTOS

BINALONAN, Pangasinan — They’re out for blood and netizens love it!

“Vampires” in this town have been luring residents to a blood drive next week using social media and a sense of fun.

Last year, a similar invitation posted online drew only a few “likes” and “shares,”  said Mayor Ramon Guico III, adding that this year’s ghoulish idea was hatched during a committee hearing at the provincial board in Lingayen town on June 20.

In the video message recorded shortly after, Guico was shown flanked by other local officials in similar costumes, including Vice Mayor Melecio Patague and Councilor Josie Caburnay.

His online invitation “was not even scripted,” the mayor said. “I was talking spontaneously,”  he added.

“Aside from information dissemination, we also wanted to show our constituents that we can have fun,” the mayor said of the video that was posted on the Binalonan Facebook page on June 20.  As of 11 a.m. of June 24, the video has gathered 40,000 views and 492 shares.

“I hope we can collect as many bags of blood as we can,” Guico said.

The bloodletting activity, part of this town’s celebration of June as World Blood Donors’ Month, will be held at the town’s Rock Garden starting 8 in the morning on June 28.

The “viral vampires” might again make an appearance, Guico said, so as not to disappoint people who may be expecting the bloodthirsty cast at the blood drive. —Gabriel Cardinoza