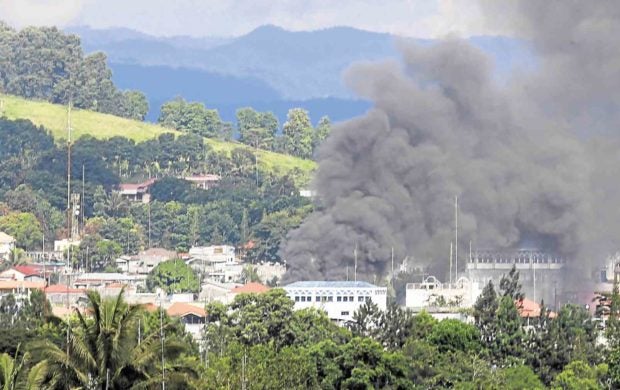 MARAWI CITY — The military on Saturday continued  its airstrikes against Maute gunmen who had entrenched themselves in some parts of the city, as the fighting entered its fifth week with no immediate end in sight.

At least two OV-10 Bronco planes were seen taking turns in dropping bombs on the eastern side of the city until shortly before noon. The sound of machinegun and automatic rifle fire also reverberated, while soldiers on military vehicles were seen rushing into the city center.

On Friday, Lt. Col. Jo-ar Herrera, Army 1st Infantry Division spokesperson, said the military continued to seize more areas but was unsure of how large the remaining area being held by the Maute group was.

He said the gunmen, now numbering between 90 to 100, were scattered in the areas of Bangolo, Marinaut, Raya Madaya and Lilod — the same villages the military has been trying to recapture since day one.

A Malaysian fighter who financed the siege, Mahmud bin Ahmad, as well as Omarkhayam Maute, are believed to have also suffered the same fate, even as officials admit that this could not be independently verified.

Provincial spokesperson Zia Alonto Adiong said a temporary eight-hour ceasefire would be observed on Sunday by the troops to mark Eid al-Fitr, or the end of the Islamic holy month of Ramadan.

“You could say it’s a ceasefire on the part of the Armed Forces of the Philippines,” Adiong said, adding that the unilateral ceasefire would start at 6 a.m. until 2 p.m.

“(The) military will not take any offensive against (the) Maute terrorist group in deference (to) the Eid al-Fitr occasion or celebration,”  he said.

Many Muslims end the monthlong fasting today, following the Eid celebrations in Turkey and other Muslim countries. But others have also opted to celebrate Eid al-Fitr on Monday.

At the Ma. Cristina evacuation center in Iligan City,  Samira, 22, said they had nothing special for this year’s Eid. Instead, her family would be sharing food consisting of rice, sardines, noodles and chicken meat that they bought from a nearby market.

“What is important is that we have food to share, go to the mosque, and pray and thank Allah for the continued blessing,” Samira said. “It is already a blessing that we continue to live even if we are in a difficult situation.”

For those in Marawi still, Adiong said they would also have a simple celebration with officials sharing native food with the 1,000 people sheltered at the capitol compound.

“This local militant group robbed us (of) the chance to observe Ramadan peacefully, and stole from us the opportunity to celebrate Eid al-Fitr and be with our loved ones in this religious occasion,” Adiong said.

In Linamon, Lanao del Norte, Mayor Randy Macapil told the Inquirer that the uncertainty has prompted them to adjust the curfew hours, which had been in effect in the town since the fighting here started. Linamon is only about an hour by car from here.

Macapil said nobody will now be allowed to roam in Linamon from 8 p.m. to 4 a.m. starting Saturday.

“All business establishments were advised to close at 5:30 p.m.,” he said, adding that they also tapped volunteers and Army reservists—along with the local anticrime group—as force multipliers.

In Malacañang, presidential spokesperson Ernesto Abella on Saturday said proper complaints should be filed if there are human rights abuses committed under martial law, vowing that authorities would investigate and prosecute those involved immediately.

“The President, the Armed Forces of the Philippines, the Philippine National Police and the Department of National Defense secretary, who is the Mindanao administrator for martial law, do not encourage or tolerate abuses by the military or the police in Mindanao or elsewhere,” Abella said.

He made the statement in the wake of recent reports that the Integrated Bar of the Philippines in Lanao had found human rights violations under martial law, particularly warrantless searches of houses and business establishments.

Absent any specific reports of abuses, he asked critics to temper their judgment of the soldiers who are battling extremists in Marawi.

President Duterte placed the whole of Mindanao under martial law last month after members of the Maute and Abu Sayyaf groups, who had pledged allegiance to the Islamic State, attacked Marawi.

The extremist groups launched the attacks after a failed attempt from government forces to arrest Hapilon. Authorities said the groups wanted to establish a caliphate in Marawi. —WITH REPORTS FROM LEILA  B. SALAVERRIA AND DJ YAP IN MANILA