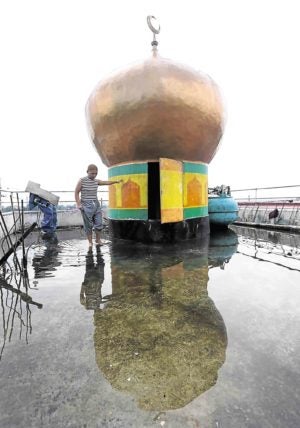 RAMADAN REFLECTIONS The top deck of the Quezon City Mubarak Mosque briefly turns into a lagoon after Friday’s rains.—LYN RILLON

The Manila Police District (MPD) will field undercover officers as part of security measures for Monday’s Eid al-Fitr festivities in the capital.

In a press briefing on Friday at Camp Crame, MPD spokesperson Supt. Erwin Margarejo said some 500 personnel would be deployed at the two venues of the Islamic celebration in Manila.

Margarejo said a congressional prayer would be held at the Quirino Grandstand to coincide with festivities at the Golden Mosque in Quiapo on Monday morning.

“Paneling operations will be conducted by our K9 units on the venues and we will deploy covert security or plainclothes police officers to maintain peace and order,” he said.

Margarejo assured the public that while the MPD had not received any information pointing to a security threat, plainclothesmen would be deployed in the venues as early as Saturday.

The MPD will also set up an advance command post, deploy health units and issue a traffic advisory.

Checkpoints will also be set up around Manila.—JEANNETTE I. ANDRADE