Bayron back as Puerto Princesa mayor but ex-mayor prepares to fight it out in court
By: Redempto D. Anda - Correspondent / @demptoanda
Philippine Daily Inquirer / 12:30 AM June 24, 2017 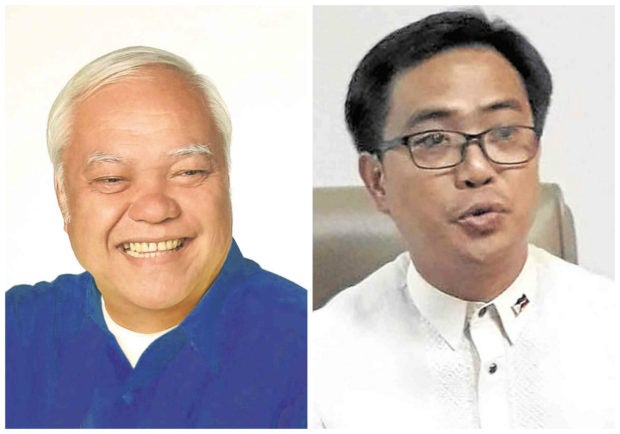 PUERTO PRINCESA CITY—A legal battle for the mayoral seat of this Palawan provincial capital looms after the Department of the Interior and Local Government (DILG) on Thursday reinstated Lucilo Bayron as mayor of this city.

The DILG installed Bayron anew after the Ombudsman dismissed a criminal complaint filed by a resident against Bayron and his son, Karl, for serious dishonesty and grave misconduct.

The decision was a turnaround from the Ombudsman’s ruling in December 2016, that dismissed Bayron and his son from government service. Acting on Bayron’s appeal, the Ombudsman last week reversed its previous decision and downgraded the case to “simple dishonesty.” It imposed a lesser penalty of suspension of three months.

Bayron was sworn back into office by Florida Dijan, DILG regional director in Mimaropa (Mindoro, Marinduque, Romblon, Palawan), before Palawan Gov. Jose Alvarez in a hastily organized ceremony at the provincial capitol. This happened as Bayron’s supporters picketed City Hall while Mayor Luis Marcaida III stayed inside his office and refused to receive the DILG order.

But he indicated in previous statements that he would await the decision of the Court of Appeals (CA) on a motion questioning the Ombudsman’s reversal of its ruling that allowed Bayron to reassume as mayor.

“He (Marcaida) was puzzled by the Ombudsman’s recent decision which contradicted its own manifestation submitted to the CA,” Agustin Rocamora, Marcaida’s lawyer, told the Inquirer.

Rocamora was referring to a 39-page manifestation filed by the Ombudsman’s legal department in the CA defending its decision to suspend Bayron, before it issued a conflicting order while the CA was deliberating on the case.

Bayron and his son had been accused of concealing their kinship in documents and in an employment contract they signed, a case that the Ombudsman classified as “serious dishonesty” with a stiff penalty of disqualification from government service.

Rocamora said the Ombudsman had lost jurisdiction over the case after it issued the ruling, which the DILG implemented when it installed Marcaida as mayor by rule of succession.

Rocamora pointed out that Bayron himself had elevated the case to the CA, foregoing his option to file a motion for reconsideration in the Ombudsman.

“The case was out of their (Ombudsman’s) hands. They even submitted a 39-page manifestation to the CA,” Rocamora said.

Bayron also declared that he would not recognize Marcaida as vice mayor, a post now being occupied by his political ally, Nancy Socrates, formerly the top-ranked councilor.

“I knew I was going to be exonerated,” Bayron said.

He earlier described the complaint as politically motivated.

Bayron’s lawyer, Winston Gonzales, told the Inquirer that Marcaida could resume his duties as vice mayor, “but that means he cannot anymore intervene in the CA case.”

Gonzales said Marcaida filed a motion to intervene in the CA case in his official capacity as mayor of Puerto Princesa.

“If he wants to go back [and serve] as vice mayor, he should abandon his intervention in the CA,” Gonzales said.