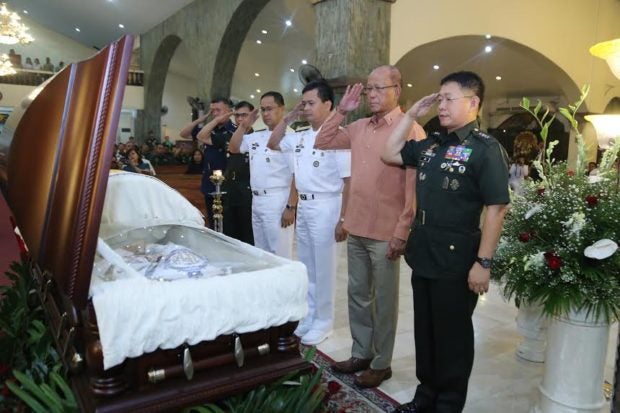 Defense Secretary Delfin Lorenzana and Armed Forces of the Philippines Chief of Staff General Eduardo Año led the honors for the late Most Rev. Leopoldo Tumulak during a necrological service held Wednesday night, 21 June 2017 at the St. Ignatius Cathedral. (Photo from PAO/AFP)

Defense Secretary Delfin Lorenzana and top military officials paid tribute to the late Most Rev. Leopoldo Tumulak,  bishop of the Military Ordinariate of the Philippines, in a necrological service on Wednesday night.

Tumulak died on Saturday after succumbing to pancreatic cancer. He was 72 years old.

“Not all heroes are found in battlefield or warzone. Some are behind the cloak of faith and litanies serving our one true God. Such is the highly revered man whom we are paying our last respect this evening,” AFP chief Gen. Eduardo Año said in the necrological service held at St. Ignatius chapel at Camp Aguinaldo.

The AFP chief recalled the time when he visited Tumulak in the hospital and said it was a heartbreaking moment to see him in a weak state, but he tried to hold his emotions.

“Even in the most trying time of his life, Bishop Tumulak kept his calm as he looked very peaceful when he accepted his fate. I will never forget that moment when he hugged me and whispered that he is happy and at peace. He further whispered, ‘Take care of the AFP.’ Even in his last moments, he had nothing but best wishes for the AFP,” he said.

Tumulak became bishop of the Military Ordinariate in 2005. At the time of his death, he was also chairperson of the CBCP’s Episcopal Commission on Prison Pastoral Care. Frances Mangosing/JE/rga