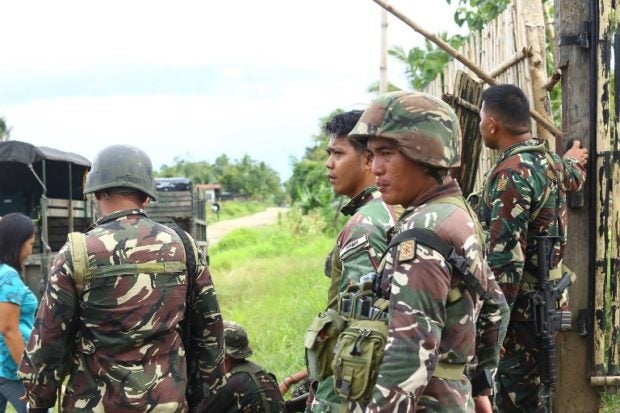 Philippine soldiers patrol a road at Pigcawayan, a farming town about 160 kilometers (100 miles) from Marawi city, on north Cotabato, in the southern Philippine island of Mindanao on June 21, 2017. / AFP PHOTO / STRINGER

The attack in Pigcawayan, North Cotabato by the Bangsamoro Islamic Freedom Fighters on Wednesday was a diversionary tactic from the military’s focus in the operations in Marawi City, according to a security analyst.

He also said that there were two of three factions in the BIFF that were allied with the Maute group fighting in Marawi City.

(In our opinion, the reason why they attacked the government forces in North Cotabato was so that the attention would be diverted from Marawi City.)

Brig. Gen. Restituto Padilla of the Armed Forces of the Philippines said in a separate interview that it was not a diversionary tactic but more of a retaliation against the government offensives in the past two weeks.

Members of the BIFF stormed a school early Wednesday, and engaged themselves with the military. The military claimed that the fighters used the civilians as human shields.

The hostages were freed after a day-long gun battle.

BIFF spokesperson Abu Misry Mama told Radyo Inquirer that they did not intend to take the civilians as hostages, but only sheltered them to a safe place during the gun battle.

(We didn’t do anything, we did not take hostages.)

He said that they attacked Pigcawayan as “revenge” for the attacks in Maguindanao a few days ago.

Mama threatened that they will launch another attack if the government forces won’t remove their detachments in North Cotabato.

(If the military detachment won’t leave the villages in North Cotabato, we will attack them.)

Mama said the attack started when they were supposed to arrest a barangay chairman in Brgy. Malagakit for being a tipster of the military.

(The BIFF served a warrant to the village captain of Malagakit because he was an informant of the AFP.)

Authorities have released conflicting numbers on the number of attackers. Police said it was about 300 while the military said it was only 30 to 50. Mama said that whatever the figures are, the military could not wipe them out.