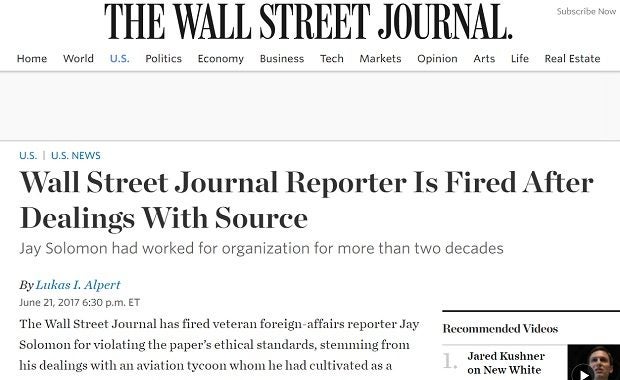 This screengrab shows the Wall Street Journal’s story published on its website June 21, 2017, about the firing of 20-year employee Jay Solomon over alleged dealings with one of his news sources. WWW.WSJ.COM SCREENGRAB

WASHINGTON, United States — The Wall Street Journal on Wednesday fired a top correspondent over ethics violations after a news agency investigation uncovered potential business dealings with an Iranian-American businessman who was also a source.

Jay Solomon, the newspaper’s chief foreign affairs correspondent and author of a book on secret deals involving Iran, “is no longer employed by The Wall Street Journal,” said a statement by the newspaper’s parent Dow Jones, a unit of News Corp.

“We are dismayed by the actions and poor judgment of Jay Solomon. The allegations raised by this reporting are serious. While our own investigation continues, we have concluded that Mr. Solomon violated his ethical obligations as a reporter, as well as our standards.”

Solomon’s dismissal comes after the Associated Press reported he was offered a stake in a company by Farhad Azima, an Iranian-born magnate who has been linked to deals involving the CIA, according to the report.

AP said that during its investigation of Azima, it obtained emails and text messages between Azima and Solomon, as well as other documents. The news agency said it asked the Journal about the documents appearing to link Solomon and Azima, which led to his firing.

Solomon told AP in a statement he never engaged in any business dealings with Azima.

The initial AP report was on a web of Azima’s business dealings which appeared to include federal contracts and possible CIA links. Azima is an Iranian-born US citizen, according to the report.

Solomon, according to his website, has reported for nearly two decades from Asia, Africa, and the Middle East, including stints in Jakarta, Seoul, New Delhi and Washington, and has been nominated three times for Pulitzer Prizes.

He was, according to his website, the first American journalist to uncover secret meetings between the United States and Iran that paved the way for a 2015 deal to ease sanctions on the Islamic Republic in exchange for limits on its nuclear program. CBB