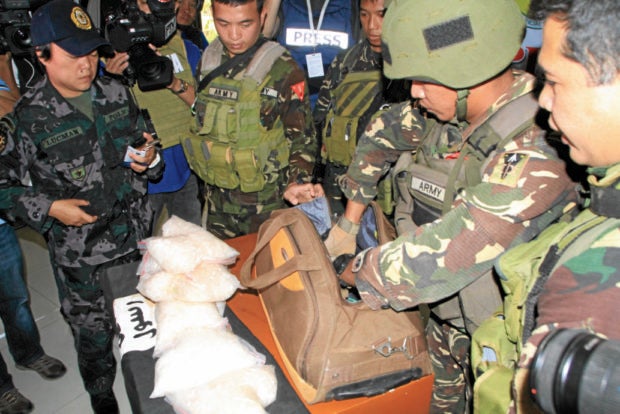 MARAWI CITY — “Shabu” is keeping the terrorists holed up in Marawi City tenacious despite their dwindling numbers, slowing the advance of government troops, the military said on Monday.

Lt. Col. Jo-Ar Herrera, spokesperson for the Army’s 1st Infanty Division, said the military reached the conclusion about the terrorists’ use of shabu, or crystal meth, after the recovery on Sunday evening of 11 pieces of 1-kilogram packs of the illegal drug from a house used by the terrorists as cover in clashes with government troops.

Found by troops from the 49th Infantry Battalion, the shabu was estimated to be worth P110 million to P250 million, Herrera said.

“This validated the observation of our troops that the enemies were suicidal and appeared to be drug-crazed,” Herrera said, adding that drug paraphernalia and at least four rifles and a black flag of the Islamic State (IS) jihadist group in Iraq and Syria were also found in the house.

Capt. Eric Estrevillo, the civil-military officer of the 49th Infantry Battalion, said IS-inspired gunmen from the Maute terror group held the house for about a week and put up fierce resistance before troops captured it on Sunday.

“[The gunmen] appeared [to be] very energetic and high on drugs,” Estrevillo said.

The military estimates that up to 120 terrorists are holed up in buildings, houses and mosques in the commercial district of Marawi.

Herrera said the drug-fueled determination of the terrorists and their use of high-powered firearms, such as antitank weapons, and fuel bombs were slowing the advance of government troops.

He said the terrorists also used fuel bombs during a clash with government forces on May 31 that cost the lives of 13 Marines.

Herrera said the government troops continued to advance and had killed 257 terrorists since May 23.

He said three soldiers were killed in fighting on Sunday, bringing the government’s losses to 62, including three policemen.

Twenty-six civilians have died in the fighting since the crisis began four weeks ago.

One of those killed on Sunday was Cpl. Arshid Isirani of the Marine Battalion Landing Team 5, who was shot by a sniper in the chest.

Isirani’s remains were flown back to his home in Zamboanga City on Monday, Herrera said.

Herrera said the military had sent in another battalion to fight the Maute terrorists and their allies from the Abu Sayyaf bandit group.

Aside from using high-rise buildings and mosques to stage attacks, the terrorists were also using technology to determine the position of advancing government troops.

“They have used drones, the commercial ones that we can buy anywhere,” he said.

Soldiers have shot down several of the terrorists’ drones, he said.

Herrera denied that the military had been using poison bombs against the terrorists.

“Please do not believe what you read on social media. Your Armed Forces is a Constitution-based organization and we follow international laws on warfare,” he said.

Herrera added that the military was trying to rescue as many civilians as it could from the war zone.

“Last night, we rescued another trapped civilian, bringing the total to 1,637,” he said.

The fighting began on May 23 when Maute and Abu Sayyaf gunmen laid siege to Marawi after a failed military attempt to capture Isnilon Hapilon, an Abu Sayyaf leader who had pledged allegiance to IS.

The military was caught by surprise and President Duterte declared martial law in all of Mindanao to crush the terrorists’ attempt to establish an IS enclave in Mindanao.

Foreign fighters have been killed in the fighting, including from Middle Eastern countries and Chechnya, indicating IS fighters returning from Iraq and Syria are opening a new front—in Southeast Asia.

The developments in Mindanao have raised significant alarm in Washington.

Small numbers of US Special Forces remain in an “advise and assist” role, and the United States is providing aerial surveillance to help Philippine troops retake Marawi from the terrorists, he said.

But US lawmakers, including from President Donald Trump’s Republican Party, want a bigger US role, short of boots on the ground.

They fear the area is becoming a new hub for IS fighters from Southeast Asia and beyond.

“I don’t know that Isis are directing operations there but they are certainly trying to get fighters into that region,” said Republican Sen. Joni Ernst of Iowa, using another acronym for IS. “We need to address the situation. It should not get out of control.” —With a report from AP