All about dad at Father’s Day Read-Along | Inquirer News

All about dad at Father’s Day Read-Along 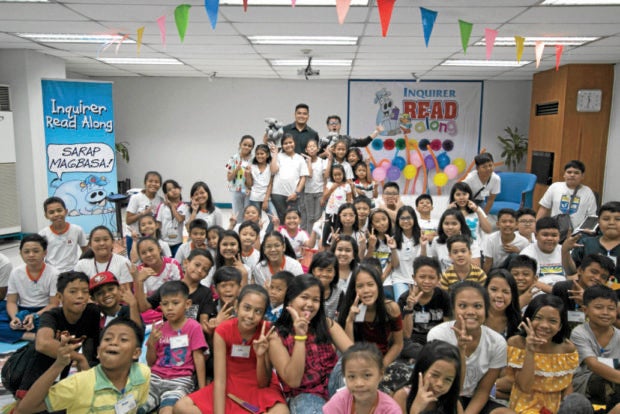 Tales celebrating the sacrifice of fathers and the patriotism of a young hero were told to some 90 kids during the Inquirer Read-Along session at the Inquirer main office in Makati on June 17.

Rodriguez read Rhandee Garlitos’ “May Higante sa Aming Bahay,” about the first encounter of the family’s youngest child Matt-Matt with his father who returns home from work overseas.

Read-Along participant Prince, 11, said he somehow related to Matt-Matt’s story. He has not seen his father for three years but he appreciates the sacrifice of his father who has to be away to provide for them.

Francoise, 11, said she had coped with having a father who was an overseas worker because of their constant communication.

Vargas read “Ang Maraming Ngalan ni Emilio” by Weng Cahiles, which tells about the patriotic acts of Emilio Jacinto who had used various names as brains of the Katipunan movement.

A returning storyteller, Vargas said the life of Jacinto, whose pivotal role in the revolutionary movement was cut short after his death at age 24, represented the promise of youth.

“Emilio Jacinto is a very exceptional person. He used his talents and his creativity to forward national freedom,” Vargas said.

As the nation marked its 119th year of independence, Vargas urged children to value the country’s past.

“We commemorate Independence Day to remind us that the freedom we have now is because of our heroes like Emilio,” he said.

“[The youth] should not forget our past, because otherwise we might be bound to make the same mistakes our ancestors had committed,” Vargas said.

Vargas, who has been a reading advocate since his student days in Ateneo de Manila, reads with his two daughters during bedtime.

“As an actor, I’m animated [in storytelling] and I don’t mind looking funny when I’m so expressive in reading to them,” Vargas said.