He’s back: After 5 days, Duterte appears in public 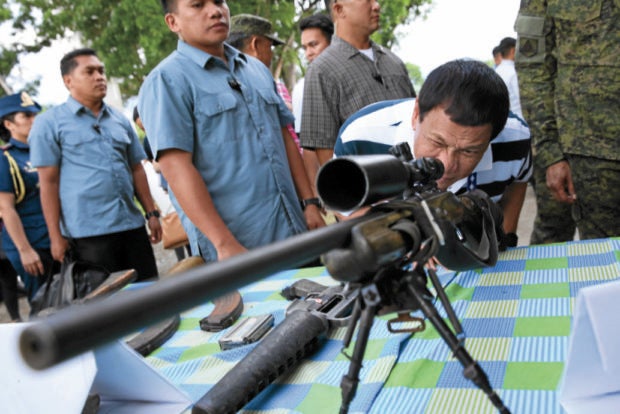 President Duterte looks through the scope of a sniper rifle recovered from communist rebels at an Army camp in Butuan City. —MALACAÑANG PHOTO

BUTUAN CITY — President Duterte was both jovial and solemn when he appeared at two separate events in Mindanao on Saturday after a five-day absence, quashing speculations that his health had deteriorated.

Speaking to reporters after addressing troops from the 4th Infantry Division Advance Command Post in Butuan City, the President made fun of rumors that he was in a coma. Instead, he said he was in his “kama” (bed).

“My state of health is what you see is what you get,” he said. “To my countrymen, do not worry too much. Don’t you want it? Maybe in one year, there would be a new President.”

“If you can’t find me after five days, that means [I’m] dead, so you swear in [Vice President Leni] Robredo. What’s your problem? There is a Vice President,” he said.

He also said that during his absence he traveled for two days “incognito” with his close aide to an undisclosed place in Mindanao.

“I traveled like a private citizen to go where I wanted to go,” he told reporters. “I traveled at night because it was sub rosa.”

Mr. Duterte was last seen in public on Sunday, June 11, when he attended ceremonies for Marines killed in a fierce gun battle in Marawi days earlier.

He missed the Independence Day rites the following day, sparking rumors about his health.

“I was really tired. It was not that I snubbed the Independence Day celebration,” he said.

The President spoke in a serious tone when he addressed the troops from the 4th Infantry Division in Butuan’s Barangay Bancasi.

“I call on you to continue performing your duty to our country, especially as martial law remains in effect in Mindanao,” he told soldiers as the military launched a fresh offensive to dislodge Islamic State (IS)-inspired fighters in Marawi on Saturday.

“Remember the valor … of your fellow soldiers who offered their lives for their country.

“I am filled with nice feeling, I love you all,” he said. “I am hurt whenever anyone of you gets into a bad fix.”

He slammed “politicians” in Marawi, whom he did not identify, for helping the IS fighters bring firearms into the city surreptitiously.

“All the while, the Maute, with the connivance of the politicians there, the warlords, were stockpiling,” he added.

This, he said, was the reason the terrorist gunmen have not ran out of ammunition, including rifle grenades.

“When government fires one, they fire back with five,” he said. “So it was like they have endless supply when Maute rose to fight the government.”

The President said the terrorist gunmen had waited for the right time to attack.

When the fighting erupted, “the Indonesian forces went down from the hills” backed also by a “conglomeration of Isis from Syria, Indonesia, Malaysia, Sri Lanka, Arabs (Kuwaitis),” he said.

The President said the fighting was “winding up but at the cost of many soldiers.”

Because the government has already lost more than 50 soldiers in the fighting, he said they have to “finish” the terrorists.

Mr. Duterte also assured the soldiers that government will provide everything they need.

“I am with you in everything,” he said, adding that the soldiers’ needs will be a “priority.”

“I will not abandon you,” he said, promising to raise a P50-billion trust fund for education of the soldiers’ children. “I know what’s always on your mind—your family.”

“Because you’re always there out in the field, so my thoughts are always with you—how I can improve your lives and protect you,” he said.

“I talk from the heart … I have a dirty mouth, but when I say that it is all with sincerity,” he added.

All throughout his speech to the troops the President did not utter one cuss word.

But it was a different President Duterte earlier that day in Cabadbaran, Agusan del Norte, where he joined the celebrations of the 50th foundation day of the province.

He was his usual folksy self, cracking jokes as he spoke about his administration’s war on drugs, the communist insurgency and the nearly monthlong fighting in Marawi.

At one point, he called on stage the wife of a former classmate from way back in kindergarten in the town of Candelaria. —WITH REPORTS FROM NICO ALCONABA AND LEILA B. SALAVERRIA