6 dead, 19 injured as truck rams into homes in Taytay 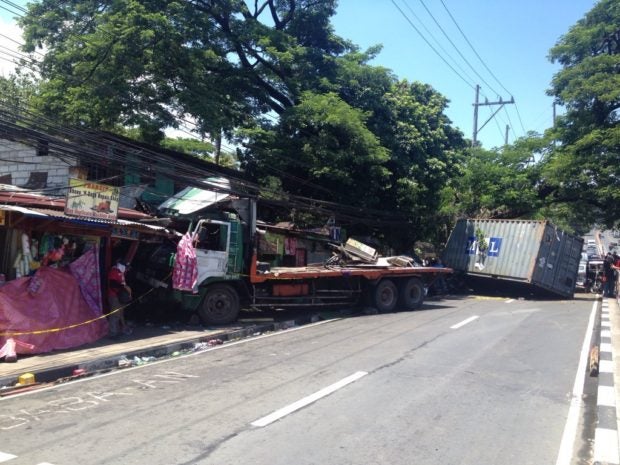 (4th Update, 4:30 p.m.) The death toll in the Taytay road mishap in Rizal province rose to six after a trailer truck carrying a 20-foot container van plowed into a row of stores and tricycle terminal Saturday morning.

As of 4:30 p.m., the names of the six fatalities remained unavailable, according to Taytay police chief Supt. Samuel Delorino in an interview with the Inquirer.  The names could not be disclosed as some families are still identifying the bodies recovered at the scene.

The number of injured people remained at 19. They are mostly bystanders and pedestrians walking along the road when the incident happened.

Among those who died were four female—including a 1-year-old girl and her mother, a grade 11 student and a female landlady—and two male tricycle drivers, said Richard Marcellano, team leader of the Taytay Rizal Municipal Disaster Risk Reduction Management  Office (TMDRRMO) who participated in the rescue operations.

Hansel Santos, barangay Dolores investigator, said a closed circuit television footage showed the truck hit first the rear part of a tricycle, maneuvered to avoid it but eventually lost control. The container the truck carried, he said, fell from the trailer and hit a tree. The main trailer hit the stores and then the tricycles parked on the nearby terminal.

Based on initial investigations, the Taytay Police said the trailer truck with plate number TBP967 was traveling from the upper portion of Cabrera road going down to Tikling toward Ortigas Avenue extension when it allegedly lost its brake, crashed into stores and hit bystanders near a tricycle terminal around 9 a.m.

The rescuers arrived immediately minutes after receiving the report.

Marcellano identified the truck driver as Paul John Teston, 22, and its passenger Christan Chua, 20. Both of them were brought to Mayor June V. Zapanta Emergency Hospital for abrasions and minor injuries.

Santos said one of the two deceased tricycle drivers was first found under the trailer truck. The last to be recovered was the body of a one-year-old girl who will turn two this November, Marcellano said.

TMDRRMO confirmed the death toll and the number of injured but refused to identify the names of the victims at press time as some of them have not been identified by their families yet, Marcellano said.

Most of the victims were brought to Manila East Medical Center, while the female fatality was brought to Mayor June V. Zapanta Emergency Hospital.