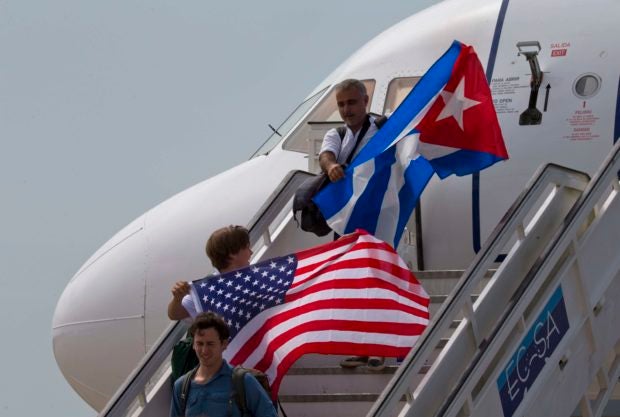 In this Aug. 31, 2016 file photo, two passengers deplane from JetBlue flight 387 waving a United States, and Cuban national flag, in Santa Clara. As President Donald Trump vows a reversal on the US Cuba policy on Friday, June 16, 2017, Cubans are bracing for the worst. Across the island, people of all ages, professions and political beliefs expect rising tensions, fewer American visitors and a harder time seeing relatives in the US. (AP Photo/Ramon Espinosa, File)

US President Donald Trump says tightening restrictions on American business and tourism in Cuba will help the island’s people and small private businesses, but analysts warn it will do the opposite.

The US president framed it as a move against a “cruel and brutal” regime: bypassing the state military-run business group GAESA, which is Cuba’s state Business Administration Group, to channel investment to the people.

But in Cuba, cutting out the armed forces means undermining the tourism sector, which is largely controlled by GAESA but also supports many small, private businesses.

“The new measures will attack the only sources of growth that the Cuban economy currently has: tourism and the private sector,” said Pavel Vidal, a Cuban economist at Pontifical Xaverian University in Colombia.

“The companies under military control are decisive for the operation of tourist services. If you restrict its capacity to receive foreign investment and make international payments, the economy is sure to suffer.”

GAESA manages some 50 hotels, chains of shops, construction, communications and distribution firms and the major port of Mariel west of Havana.

Run by Luis Rodriguez Lopez-Callejas, son-in-law of Cuba’s President Raul Castro, GAESA is involved in joint ventures with several foreign firms that have driven a tourism boom on the island, including the Marriott hotel chain.

Since taking over the running of the country just over a decade ago, Castro has been gradually expanding the private sector and trying to open up the country to foreign businesses.

After decades of Cold War enmity, he oversaw a diplomatic rapprochement with the United States under Trump’s predecessor Barack Obama.

But the reforms have been slow and Cuba is in recession, dragged down by the decline in cut-price oil imports from its crisis-hit ally Venezuela.

US companies active in Cuba have complained about the threat to business—such as the Starwood hotel chain which last year opened a Sheraton in Havana.

But the biggest impact may be felt by Cubans themselves.

“There will be little impact on the US economy,” said Michael Shifter, a specialist at the Inter-American Dialogue, a Washington-based research group.

“But for the Cuban economy—including the private sector—this shift is a tremendous blow.”

A group of 55 Cuban businesspeople sent a letter this week to Trump’s daughter and adviser, Ivanka, warning against the policy changes.

“A backward move for (US-Cuban) relations would bring with it the collapse of many businesses” and “the suffering of all the families that depend on them,” they wrote.

Trump said he would restrict US tourist visits to the island, which had increased as part of cultural exchange travel approved by Obama.

“The growth of the private sector was linked to tourist demand which was growing in part due to the flow of US tourists,” said Vidal.

“If that flow is reduced and demand slows down, private companies will be badly affected.”

Cuban officials said Wednesday that nearly 285,000 US visitors flocked to Cuba in the first five months of 2017, roughly the same number as for all of last year.

That was a fraction of the four million tourists who visited the island overall. But officials said US visitors in particular tended to patronize private businesses.

“Less tourism from the United States will clearly be a blow,” said Alberto Gonzales, 23, a private taxi driver in Havana.

“Not just for taxis, but for all the private businesses, guest houses and restaurants.”

Castro has announced he will step aside as president in February 2018. He is expected to remain a senior figure in the ruling party, with power passing to an ally.

Cuban state newspaper Granma, a mouthpiece of the regime, said Trump’s measures heralded “a return to the Cold War.”

“It is doubtful that they will trigger any move in Cuba towards a new governing structure or new leadership,” said Shifter.

“These measures are likely to strengthen the hard line in Cuba, at least in the near term.” JPV