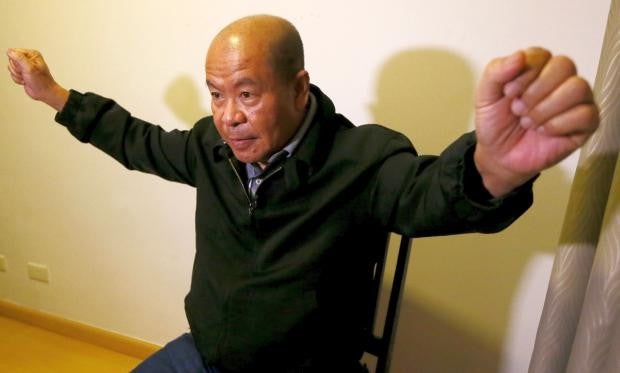 The Department of Justice (DOJ) is seeking the revocation of the passport of retired SPO3 Arturo Lascañas, who has been on the lam after linking President Duterte to grisly killings when the latter was still mayor of Davao City.

The former policeman flew out of the country in April for fear of political persecution from the Duterte administration.

“I have received threats that a lawsuit would be filed against me, and there are also people looking for me,” Lascañas told the Inquirer before flying to Singapore last April 8.

Aguirre said that three warrants of arrest had been issued against Lascañas.

“He has to be brought to court to face the charges against him,” Aguirre said in a statement.

The justice secretary said he was seeking Cayetano’s intervention “since there is no indication that [Lascañas] will return.”

Lascañas, who left for Singapore with his family, was supposed to return to the country on April 22, said the Bureau of Immigration.

“Verily, his acts manifest his lack of desire to face the charges of murder and attempted murder filed against him … If he believes in his innocence, then he should welcome his arrest as a chance for him to clear his name and get on with his life,” Aguirre stressed.

“As it is said, when a crime goes unpunished, the world is unbalanced and the heavens will look down on us in shame. We cannot allow it. We will be remiss in our duty. We are equally guilty if we do so,” he added.

Lascañas, Mr. Duterte’s known associate in Davao, had admitted in a Senate hearing to being a member of the dreaded Davao Death Squad (DDS), a vigilante group that he claimed was the President’s brainchild.

Prior to his confession, he had absolved Mr. Duterte from the similar allegations of fellow self-confessed DDS assassin Edgar Matobato.

Lascañas had particularly owned up to the murder of Pala, saying the President had ordered them to kill the radio broadcaster for criticizing Mr. Duterte in his radio program.

Lascañas named two other security aides of the President who allegedly helped him carry out the order, but they were not indicted by the Davao City Prosecutor’s Office.