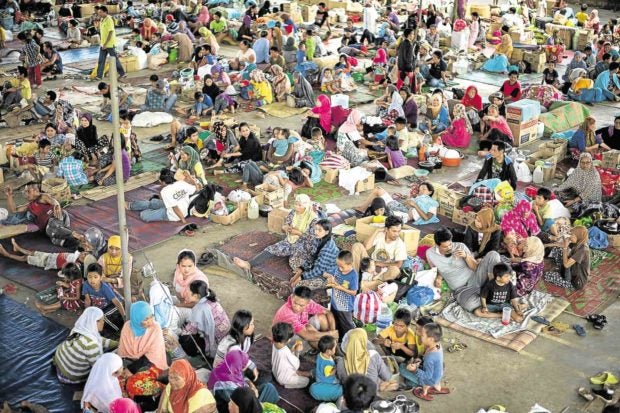 Evacuees from Marawi City find safety in the town of Saguiaran in Lanao del Sur province, away from the fighting raging in their city since last month. —AFP

The plan was also intended to avoid the outbreak of disease in evacuation centers, Hataman said, adding that it was in anticipation of a prolonged fight in Marawi that entered its 24th day on Thursday.

Hataman said even if the conflict would end, some evacuees would need to stay where they were now.

“They may not have homes to return to as these were destroyed in the fighting,” he said.

According to Hataman, a team from the ARMM government is checking on a possible site for the tent city between Marawi and Saguiaran town in Lanao del Sur province.

The ARMM’s Humanitarian Emergency Action Response Team listed 200,234 displaced people as of June 12. Of the number, 16,600 are in evacuation centers while the rest are staying with relatives in nearby cities and towns.

In Iloilo province, Ilonggos are collecting and sending donations to Marawi residents displaced by the ongoing clashes between government forces and the Islamic State-inspired Maute group.

The Iloilo City council has approved the request of Mayor Jed Patrick Mabilog to allocate P500,000 as assistance to those affected by the fighting.

Mabilog also appealed for donations for evacuees from Marawi. The donations will be collected by the city social welfare and development office and will be shipped to evacuation centers.