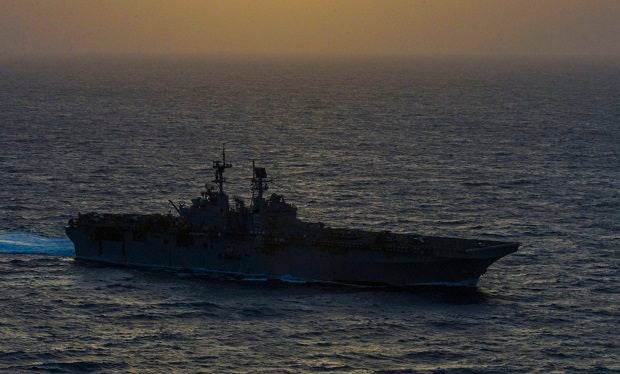 WASHINGTON, United States — An Iranian navy vessel conducted an “unsafe and unprofessional” interaction with US ships by pointing a laser at an accompanying Marine Corps helicopter, the US Navy said Wednesday.

The incident occurred June 13 as amphibious assault ship the USS Bataan, the USS Cole destroyer and another American ship were sailing in formation in international waters in the Strait of Hormuz.

“The Iranian vessel paralleled the US formation, shining a spotlight on Cole,” Commander Bill Urban, a spokesman for the navy’s Fifth Fleet, said in a statement.

“Shortly thereafter, the Iranian vessel trained a laser on a CH-53E helicopter that accompanied the formation.”

The Iranian vessel then shined a spotlight on the Bataan, scanning the ship from bow to stern before heading away.

“During the interaction, the Iranian vessel came within 800 yards (meters) of Bataan,” Urban said.

Naval Forces Central Command said the interaction was unsafe and unprofessional because of the laser.

“Illuminating helicopters with lasers at night is dangerous as it creates a navigational hazard that can impair vision and can be disorienting to pilots using night vision goggles,” Urban said.

The Pentagon periodically voices concern over incidents in waters off Iran, accusing the Iranian Revolutionary Guard Corps (IRGC) and naval ships of conducting risky maneuvers around US vessels.

Iran has counter claimed that US ships act provocatively. CBB