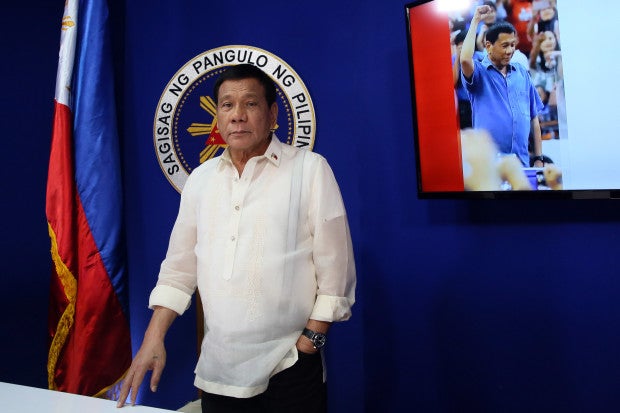 President Duterte, absent from the public eye for three days, is fine and just relaxing, according to Cabinet Secretary Leoncio Evasco.

Interviewed at the Senate where he attended a hearing by the agriculture committee on Wednesday, Evasco said the President was “all right, fine.”

“Each one of us needs to relax, including the President,” Evasco told reporters.

Mr. Duterte has not been seen in public since he condoled with the families of Marines killed in the long-running Marawi siege at the Villamor Air Base and Marines headquarters in Fort Bonifacio on Sunday night.

He skipped the next day’s Independence Day ceremonies because he was tired and not feeling well, Foreign Secretary Alan Peter Cayetano said.

Evasco, however, had “no idea” of how long the Chief Executive would take time off.

Senators said the absence of the President, who Malacañang said was taking time off after last week’s heavy workload, was no cause for concern.

“For me, it’s not a big deal,” Sen. Panfilo Lacson said, noting that previous presidents would also take time off occasionally for health reasons.

“The human body, especially that of a 71-year-old who happens to be the president of a country that has to deal with all sorts of problems like the secessionist movement in the South, NPA insurgency, illegal drugs and crimes, with corruption in government to boot, is not expected to always stay in shape. President Duterte is no exception,” Lacson said.

Senate President Aquilino Pimentel III and Majority Leader Vicente Sotto III said the Palace would certainly disclose to the public if the President was sick.

And since no announcement has been made about the status of Mr. Duterte’s health, Pimentel asked, “Why do we insist that he is sick?”

“He is resting from the public eye! I see no issue at all,” Pimentel said in a text message.

Sotto said he did not think Mr. Duterte was ill and that the latter was more likely “relaxing.”

Sen. JV Ejercito said that “now is not the time to speculate on the health of the President.”

Ejercito said he was certain that the President, who he stressed was “honest, direct to the point and transparent,” would address the issue “if there is an issue.”

He called on the public to “show a united front in the face of challenges before us.”