Marawi Bishop Edwin de la Peña.  Photo from the CBCP Online, the official website of the CBCP at http://www.cbcponline.net/bishops/bishops/pena_dela.html

MANILA — Marawi bishop Edwin dela Peña expressed hope that normalcy would be soon restored in Marawi City and that they would soon be freed from fear and terrorism.

“I pray that we would be free from violence, fear and from terrorists,” the prelate said on Monday as the country celebrated Independence Day.

Dela Peña made the remarks as government troops continued to pursue the Maute terrorist group, which attacked Marawi City more than two weeks ago.

The terrorist group still holds hostage several civilians, including Fr. Teresito Suganob. More than 200 have been killed in the ongoing clashes.

In an interview over Church-run Radio Veritas, Dela Peña noted that the situation seemed to have quieted down in some parts of Marawi City and expressed his gratitude for life itself.

He also prayed that the country be spared from further danger and calamities.

For its part, Caritas Manila, the social action arm of the Archdiocese of Manila, is continuously sending aid to the displaced families who are staying in evacuation centers in neighboring towns.

Pascual said 131,000 evacuees have been under the care of the Church there. 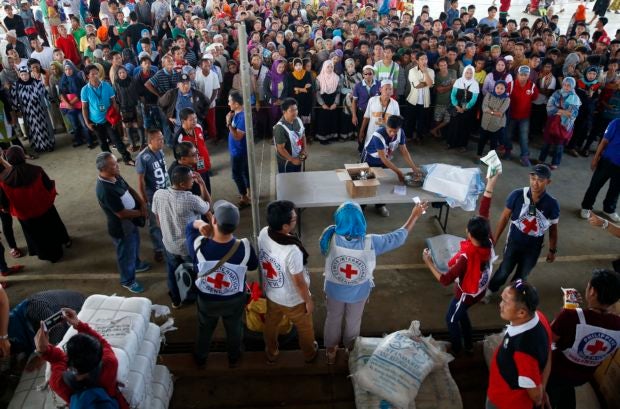 Displaced residents of Marawi city prepare to receive food packs and sleeping mats from the International Committee of the Red Cross at an evacuation center in Saguiaran township near the besieged city of Marawi, Lanao del Sur province in southern Philippines Sunday, May 28, 2017. Tens of thousands of residents are now housed in different evacuation centers as government troops fight to wrest control of the southern city from Muslim militants linked to the Islamic State group. (AP Photo/Bullit Marquez)