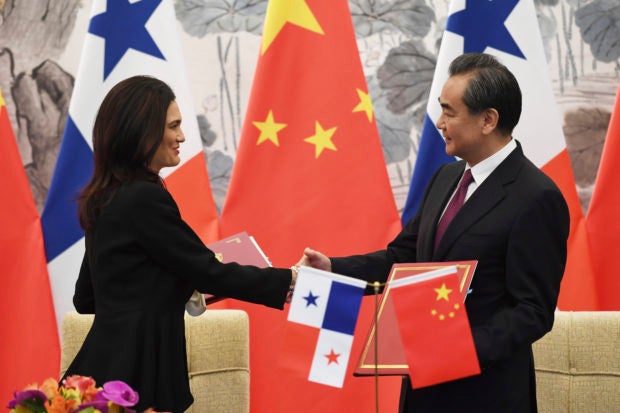 PANAMA CITY, Panama — Panama broke off diplomatic relations with Taiwan and switched to Beijing, accepting its One China policy, the countries announced Monday.

“In light of the interests and wishes of both peoples, the Republic of Panama and People’s Republic of China have decided to grant each other, from the date of this document’s signing, mutual recognition, establishment of diplomatic ties at the ambassadorial level,” the note said.

After decades of siding with Taiwan in the disagreement, Panama now “recognizes that there is only one China in the world” and that Taiwan is part of Chinese territory.

The new relationship with Beijing was starting Monday, and the previous one with Taiwan ending, the note added.

The announcement comes after Beijing began construction last week of a container port, with natural gas facilities, in Panama’s northern province of Colon.

Taiwan, considered a rebel province by Beijing, is recognized by around 20 countries worldwide and the issue of its status has risen again with the election of US President Donald Trump.

Panama long had stressed it had diplomatic ties with Taipei and commercial ones with Beijing.

Panama over the years received generous aid, millions of dollars in cooperation funds from Taipei. But it was simultaneously pressed for decades by Beijing to adopt its stand.

The status of and the dispute rose in December after Trump, elected president a month earlier, spoke to Taiwan’s president by telephone.

Trump became the first president or president-elect to speak to a Taiwanese leader since at least 1979, when the United States severed diplomatic ties with Taiwan as part of its recognition of the People’s Republic of China.

In the statement, Trump’s office said the two leaders had noted “the close economic, political, and security ties” between Taiwan and the United States, but the very contact threatened to upend almost four decades of US foreign policy.

After years of heavy rhetoric, relations between China and Taiwan started improving in the 1980s. China put forward a formula, known as “one country, two systems”, under which Taiwan would be given significant autonomy if it accepted Chinese reunification.

The offer was rejected, but Taiwan did relax rules on visits to and investment in China. There were also limited talks between the two sides’ unofficial representatives.

But Chinese concern rose in 2000, when Taiwan elected as Chen Shui-bian, who had openly backed independence, as president.

Chen was re-elected in 2004, prompting China to pass a law the following year, stating China’s right to use “non-peaceful means” against Taiwan if it tried to secede from China. CBB/rga