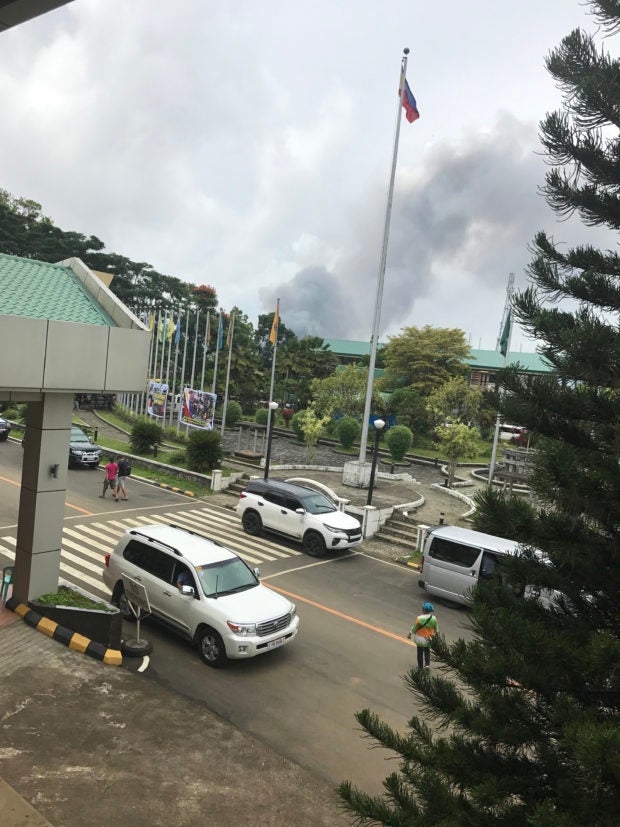 MARAWI CITY – The singing of the Philippine national anthem was somber as the flag was raised at the Marawi City hall on Monday morning – the day the country celebrated the 119th anniversary of its Independence Day.

“We sing with a heavy heart today because our city is not yet safe,” said a city employee who would not give out her name, as she wiped away her tears.

Starting at 2 a.m., at least three OV-10 bombers took turns in dropping bombs into parts of the city, where the Maute group had maintained positions since May 23.

“Malungkot sir (I feel so sad),” said a soldier introducing himself only as Sergeant Oliver.

He said he was sad because of the many soldiers killed or wounded in the firefight against the Maute group – which entered its 20th day Monday.

Fifty-eight government troops have since died and dozens others have been wounded. The official civilian death toll was at 20 but there were reports more people have died in the 20-day conflict.

Amid the military’s claim that troops had continued to gain foothold into the city, military casualties rose by the day.

The Maute group also continued to defy the advancing troops, with snipers firing their guns towards areas deemed safe like the capitol compound.

On Sunday evening, sniper fire bullets hit the roof of the gymnasium at the provincial capitol but no one was hurt.

“We’re risking our lives everyday. We’re still not free from the Maute, that’s why I’m in pain,” the city hall employee said.

Over at the provincial capitol, Lanao del Sur Vice Governor Mamintal Adiong was holding back his tears as he spoke after the flag raising ceremony – where some provincial employees were also seen shedding tears.

“Please be patient, my Maranao brothers and sisters. We will eventually reclaim Marawi if we work together,” Adiong said in the Maranao dialect.

He said Maranaos should also seek Allah’s help to bring back peace in the city – considered as the center of the Maranao culture and history.

“The terrorists want to get it from us, we should not allow that to happen. Let us unite for peace,” Adiong said in a cracking voice.

He also apologized to the evacuees “whom I might not have served yet.”

“But I am appealing to each and everyone of you, stand with us in reclaiming and rebuilding our city, our Marawi,” Adiong said.

Zia Alonto Adiong, the spokesperson of the Lanao del Norte crisis management committee, said the bomb run and the sniper fires, and the crisis in general, did not deter them from raising the flag.

Adiong, the spokesperson, said the flag was also simultaneously raised in the province’s 39 towns at 8 a.m. Monday.

“We have shown to the rest of the world that we only have one flag,” he added.

Vice Governor Adiong, meanwhile, lauded the “relentless efforts of our soldiers” against the Maute group, saying many of them had paid the “ultimate price.”

Col. Jose Maria Cuerpo, deputy commander of the Army’s 103rd Infantry Brigade, vowed that despite their losses, they would continue to fight the terrorists and restore peace and order in the city.

“But our battle would not stop even if we have already defeated the enemies. Our biggest task and challenge is the rehabilitation of the place and its residents,” Cuerpo said.  SFM