13 Marines killed in action, 40 wounded in 14-hour battle in Marawi 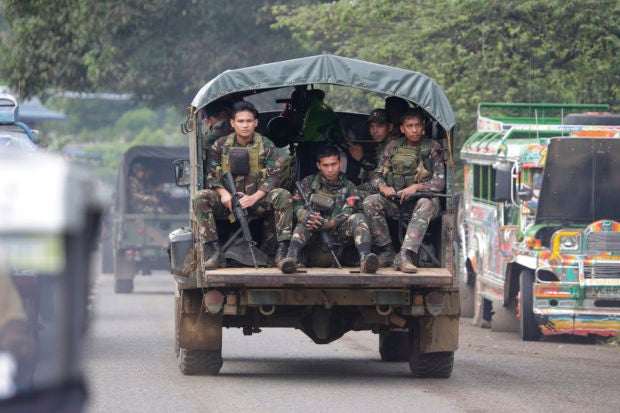 In this June 9, 2017, photo, soldiers ride a military vehicle on the outskirts of Marawi city, southern Philippines. The Philippine military says 13 marines have been killed in fierce fighting with Muslim militants who have laid siege to southern Marawi city. (AP Photo/Aaron Favila)

MARAWI, Lanao del Sur — Thirteen Marines were killed in fresh gun battles with Islamist militants who had overrun parts of southern Marawi City, a military spokesperson said on Saturday, in a dramatic surge in the toll from nearly three weeks of fighting.

Government troops are struggling to dislodge hundreds of fighters, who rampaged through the mainly Muslim city of Marawi on May 23 flying black flags of the Islamic State (IS) group, and have used bombproof tunnels, antitank weapons and human shields to fortify their positions.

“We are saddened with the result … we have fatalities on the government side. We have incurred 13 killed in action,” Herrera said at a news conference in Marawi.

But Col. Edgard Arevalo, military spokesperson in Manila, said 40 other soldiers were wounded in a “raging close quarter combat.”

The fresh casualties brought to 58 the number of government troops killed in the fighting. At least 138 militants and 20 civilians had also been killed, the government said.

The militants have so far withstood more than two weeks of air and ground assaults by security forces, although the military said they occupy only around 10 percent of the city.

“This temporary setback has not diminished our resolve a bit,” Arevalo said. “It instead primed up our determination to continue our prudent advances to neutralize the enemy, save the innocent lives trapped in the fight, and set the conditions for the rehabilitation and reconstruction of Marawi.”

Among those killed was 1st Lt. Frederick Savellano, a native of Antipolo City, who just days earlier led his team in recovering P52 million in cash allegedly left behind by the terrorists.

“He was very courageous and a very professional soldier. It’s sad he was killed,” Herrera said, adding that while he believed the enemy side also suffered casualties he was not certain about the number.

Lt. Gen. Carlito Galvez, chief of the Western Mindanao Command, said that, apart from the 13 soldiers who perished, 40 others were wounded in “close quarter combat” in the village of Madaya in Marawi.

“Initial reports indicate that the fierce firefight ensued when the Marines assaulted the reported enemy position at around 3:30 a.m. and firefight continued up to around 3 p.m. of the same day,” Galvez said.

“We salute the enormous display of heroism and raw courage of these fallen Marines in the course of the fight to clear Marawi of the remaining members of the Maute-Isis Group,” he said, using the other name of the Islamic State.

The seizure of Marawi by hundreds of fighters who have sworn allegiance to the IS, including dozens from neighboring countries and the Middle East, has fueled concern that the ultraradical group is gaining a foothold in Southeast Asia. The militants, believed to number in their hundreds, have occupied Marawi since May 23.

A US P-3 Orion surveillance plane was seen flying over the town on Friday, according to local media reports.

The assistance comes after months of strain between the two longtime allies that was stoked by President Duterte’s hostility toward Washington and his pledges to throw US troops out of the country. He has declared martial law in Mindanao, the southern third of the Philippines and home to a decades-long Muslim separatist rebellion.

Washington deployed special forces soldiers to Mindanao in 2002 to train and advise Philippine units fighting Abu Sayyaf militants in a program that once involved 1,200 Americans. It was discontinued in 2015, but a small presence remained for logistics and technical support.

The United States and the Philippines have been allies for decades. Their relationship provided Washington with a strategic foothold in Asia and offered Manila a shield against China’s assertiveness in the region.

On Saturday, the military said it was validating reports that two Maute brothers leading the enemy have been slain. “We are still awaiting confirmation. We are still validating those reports but there are strong indications,” Herrera said.

Their mother, Ominta Romato Maute, alias Farhana, was arrested on Friday near the town of Masiu in Lanao del Sur, along with two wounded fighters and several women companions. The arrest came days after her husband, Cayamora Maute, was arrested trying to enter Davao earlier in the week.

Recovered from Farhana’s group were explosives. She was allegedly on a mission to procure firearms as they prepare to escape the fighting.

Fighting erupted when the military and police monitored Abu Sayyaf leader Isnilon Hapilon, the acknowledged IS leader here, in Marawi. But they were surprised when they were met by dozens of Maute terrorists, who were backed up by foreign fighters from Malaysia, Singapore and Indonesia.

The terrorists razed buildings and sacked a local Catholic Church, kidnapping its priest and dozens of other parishioners. The priest is believed to be still alive and has aired an appeal for the government to end its airstrikes, saying that the men holding them were prepared to die for their cause. —With reports from Edwin Fernandez and the wires /IDL /atm