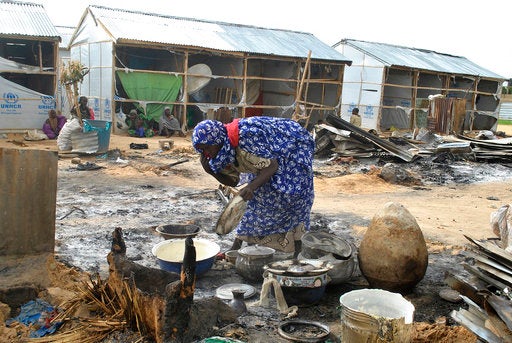 A woman salvages cooking pots at the site of an explosion, in Maiduguri, Nigeria, Thursday, June 8, 2017. Authorities in northeast Nigeria say at least six people are dead and dozens are wounded after Boko Haram militants launched a series of attacks during the Muslim holy month of Ramadan. AP

KANO, Nigergia—Boko Haram have slit the throats of four Nigerian villagers in revenge for the arrest of a senior member of the jihadist group, residents told Agence France-Presse (AFP) on Friday.

Ten gunmen on motorbikes stormed the northeastern Cameroonian border village of Hambagda near Gwoza, once the capital of Boko Haram’s self-announced “caliphate”, on Thursday before kidnapping six people and killing four others.

“They asked people to assemble but everyone started running towards the bush,” said local resident Usman Buba.

“They seized six people in the confusion and slaughtered four while two managed to escape.”

Buba said the jihadists who attacked Hambagda on Thursday afternoon decided to slit their victims’ throats instead of shooting them to avoid attracting the attention of troops stationed in Gwoza, two kilometres (1.2 miles) away.

“The attack was evidently in reprisal for the arrest of a Boko Haram kingpin who has been terrorizing the village,” Buba said.

Another resident, Dahiru Alkali, confirmed his account, adding that villagers had complained to soldiers of incessant attacks by Rugurugu and his men.

The two witnesses were able to reach AFP by telephone after arriving in Maiduguri, capital of Borno state.

Boko Haram seized Gwoza in July 2014 and made it their headquarters at a time when they were seizing swathes of northeast Nigeria in their bid to form a hardline Islamist state.

Nigerian troops retook the town in March 2015 but Boko Haram have continued to raid nearby villages from their hideouts in the mountains along the border with Cameroon, despite the government’s insistence that calm has been restored to the area.

In April, Boko Haram kidnapped 13 women who were picking fruit near Hambagda, while a month earlier its fighters abducted 18 girls from the nearby village of Pulka.

Large areas around Lake Chad and the Cameroon border remain inaccessible in an ongoing insurgency that has killed at least 20,000 since 2009.

Eleven people were killed on Wednesday when Boko Haram gunmen and suicide bombers launched a rare combined attack inside Maiduguri.