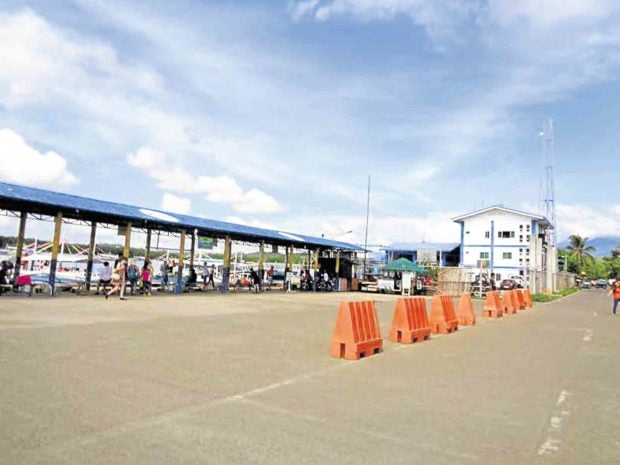 The Honda Bay wharf in Puerto Princesa City is built from an area where wastes from mercury extraction were dumped in the 1970s. The area around the wharf now hosts a community of around 80 households who depend on tourism livelihood from island-hopping tours.

The Department of Environment and Natural Resources (DENR) has formed a task force to contain the mercury contamination in two villages in Puerto Princesa City and oversee relocation and treatment of affected residents.

In a speech during the 30th anniversary celebration of the DENR on Friday, Environment Secretary Roy Cimatu also vowed to initiate legal action against the now-defunct Palawan Quicksilver Mine Inc. (PQMI), whose abandoned mine pit was blamed for the contamination in the villages of Sta. Lourdes and Tagburos in the Palawan provincial capital.

Cimatu also promised to “reinvigorate” research on mercury contamination under the Ecosystems Research and Development Board.

“The government is on top of the situation, and tourism [in Puerto Princesa City] should not be affected,” Cimatu said.

“President Duterte himself has publicly voiced demands for the mining sector to prove its worth to the people, not just to investors… These marching orders have been passed on to me, so reforms in these extractive industries will continue to be pushed and pursued,” he said.

The Department of Health, in coordination with the DENR through the Mines and Geosciences Bureau (MGB), had determined in studies since 2015 that the lake that formed in the abandoned mine pit of PQMI, which operated from 1954 to 1976 in Sta. Lourdes, had been contaminated with mercury.

This contaminated pit ran down to the Tagburos River, which flows into ecotourism destination Honda Bay in Barangay Tagburos.

Consumption of fish harvested from contaminated water bodies was blamed for mercury poisoning cases. Traces of mercury were also found in fish and shellfish around the wharf area in Santa Lourdes.

A random testing conducted by the DOH on 104 residents yielded positive results for mercury in their blood and hair samples, and noted symptoms of contamination in neurological and physical assessments.

PQMI used open pit mining to extract cinnabar ore, a toxic mineral composed of mercuric sulfide. Deposits of the mineral can be found only in Sta. Lourdes, the DENR said in a statement.

It said PQMI stopped operations in 1976 after incurring losses following a drop in cinnabar prices, though by then, the company had already been able to ship almost 3,000 tons to Japan.

In the statement, Roland de Jesus, MGB Mimaropa regional director, said PQMI operated before the passage of the Philippine Mining Act of 1995, when “environmental and social impacts of mining had not yet been included in the law.”

The Puerto Princesa City council, in a special meeting on Friday, asked agencies involved in the recent study to fully inform its members about the extent of contamination.

“We want to formulate a definite solution, maybe undertake a massive rehabilitation program to at least minimize the threat,” Councilor Jimmy Carbonnel told the Inquirer.

Members of the village council of Sta. Lourdes, however, questioned the health study’s findings.

“We want another test conducted as we are not convinced with the findings,” village councilor Jonathan Rasino told the committee.

Read Next
Mayor, 7 others sacked over heavy equipment deals
EDITORS' PICK
Geek out at TOYCON 2022 powered by Smart Signature
UK’s Boris Johnson will resign, BBC reports
High inflation: Your P1 is now worth only 87 centavos
High-risk pregnancy: Reducing your risk is in your hands
Unemployment rate up to 6% in May
House energy committee chair Arroyo bats for cheap electricity
MOST READ
Suspect in grisly killing of missing woman in Bulacan arrested
Kim Atienza’s daughter flaunts bikini body in response to critics of her ‘revealing photos’
Cop slain in Isabela ambush
FDA probes popular Filipino noodle brand for ‘high level of ethylene oxide’
Don't miss out on the latest news and information.