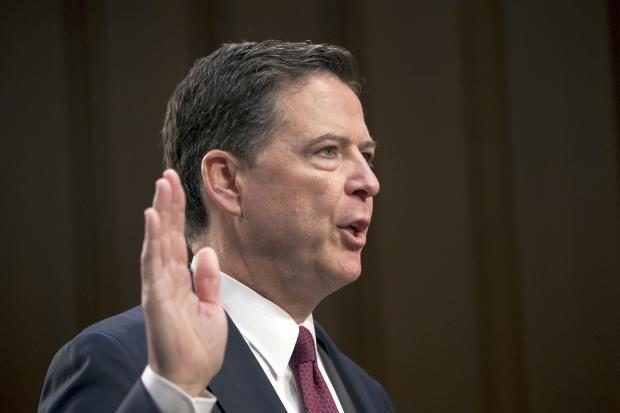 WASHINGTON—Politics-obsessed Americans gathered at bars and restaurants on Thursday with an excitement normally reserved for the Super Bowl or the World Series, ordering “FBI sandwiches” and morning shots of Russian vodka as James Comey testified about his dealings with President Donald Trump.

A special menu was offered for the occasion, with the sandwiches, the vodka and “Covfefe coffee” — a coffee with whipped cream and cinnamon, with a name derived from a recent tweet by the president.

“This is massive,” said Dani Robillard, 42, of San Francisco, who lined up outside. She said she was in town to officiate a wedding and wanted to watch the hearing with people. Like others in line, she said she did not support Trump.

“I thought it was a place where I could come and watch with a bunch of liberals,” said Heather Dade, 44.

The crowd grew quiet when the hearing began but some applauded when Comey said Trump’s administration had spread “lies, plain and simple” and “defamed” him and the FBI.

J.C. Fulse, 39, who lives in Washington, said Comey was doing a “great job,” adding “he’s much more credible than our president.”

It was standing room only at the Brooklyn coffeehouse, Building on Bond, which started showing the hearing beginning at 9 a.m.

Marjorie Sweeney, a freelance writer who lives nearby, had high hopes for Comey’s ability to take down Trump.

The crowd inside the bar applauded as the hearing ended, but many in the liberal crowd conceded there was no game-changing moment.

Sweeney said Comey’s remarks “make it very clear that there has been a major, major effort on Trump’s part to cover things up.”

One Washington bar that did nothing special was in the lobby of Trump’s hotel on Pennsylvania Avenue between the White House and the Capitol.

Of the four TVs at the bar, three were tuned to Fox News coverage of the hearing, while the fourth showed French Open tennis. The TVs were muted, with quiet jazz playing over the lobby’s sound system. That meant anyone who wanted to follow Comey’s remarks had to read the captions.

Plenty of velvet and leather seats were available at the bar, and at one point, there were as many reporters (four) as ordinary people having a drink and watching the hearing.