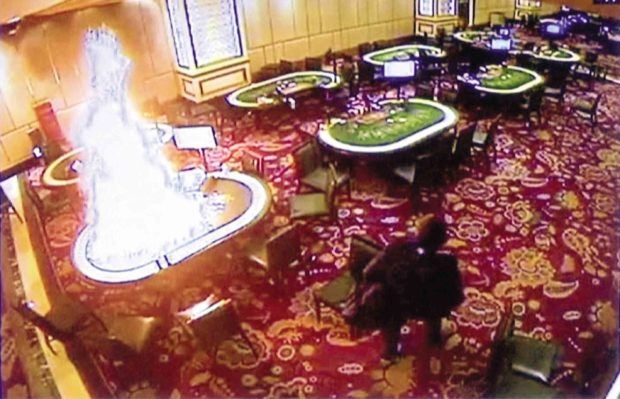 A security video grab shows the gunman torching one of the gambling tables upon entering the Pasay City casino. —AP

There might be probable cause to believe that the Resorts World Manila’s security provider has committed offenses after the deadly June 2 attack that left 38 persons, including the lone gunman, dead, the Philippine National Police’s Supervisory Office for Security and Investigation Agency (PNP-Sosia) said Thursday.

“In this case, the N.C. Lanting, there might be probable cause that may lead to the sanction,” Usana said. Security personnel of Resorts World came from N.C. Lanting security agency.

“It may range from administrative (sanction) up to cancellation and suspension but it still depends on the result of the investigation,” he said.

The official said the result of Sosia’s investigation of the incident will be submitted to the higher-ups “not later than tomorrow (Friday).”

As the supervisory and regulatory body of security agencies nationwide, Sosia has the mandate to probe lapses committed by a security provider.

Some of the violations they committed, according to Espino, were the Resorts World’s failure to increase security personnel on graveyard shift and the guards’ lack of emergency response training. IDL/rga