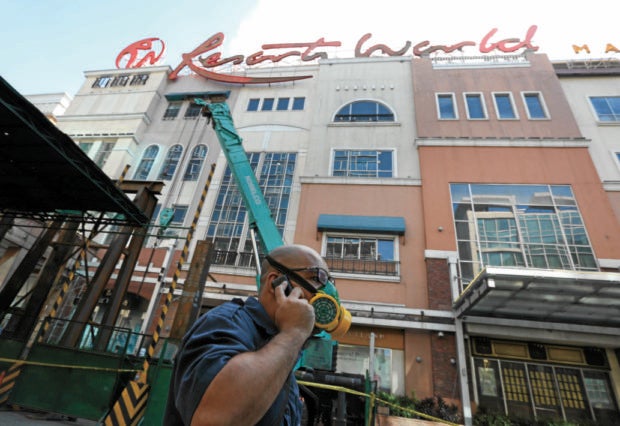 The Philippine National Police (PNP) found lapses in the security of Resorts World Manila in several occasions during the attack of a lone gunman in the casino-hotel complex that led to the death of 38 persons.

Chief Supt. Jose Mario Espino, head of the PNP Supervisory Office for Security and Investigation Agency (PNP SOSIA), said the Resorts World security failed to execute a crisis plan when gunman Jessie Carlos, a former government tax specialist who was so deep in debt, barged into the casino last Friday.

“That is expected of all establishment that they have their own fire plan, earthquake, disaster and incidents with this kind of active shooter. May plano dyan but may failure on how they executed the plan,” Espino said in a press conference on Tuesday.

Espino also noted the lack of personnel working on night shifts, saying that there was only one guard posted at the casino entrance.

The lady guard was also not wearing the prescribed uniform for security guards, which Espino said was a clear violation of SOSIA regulation on private security personnel.

Citing the lapses, Espino said: “Number one, boosting of personnel–that it should be two guards per entrance… Second, wearing of security guard uniform on entrances and exits as a deterrent.”

Espino said the guards have been instructed by the Resorts World management to have only one security personnel in the casino entrance.

“They said it was the instruction of the management na isa lang. Kung sino may fault, it will be investigated so we’re asking where’s the written policy that you should have only one guard during those times,” he said.

The official also criticized the Resorts World security for “depending so much” on the police, when they should be the first responders during a crisis in their establishment.

Carlos was only neutralized when members of the PNP Special Weapons and Tactics (SWAT) joined the casino’s security personnel. They shot the gunman when the latter hid in the basement area after burning gaming tables and slot machines and stealing P113-million worth of casino chips.

Escaping from the pursuing troops, Carlos managed to go to the adjoining hotel where he locked himself in a room and apparently committed suicide.

“Of course, it’s graveyard shift so in-adjust nila, which is actually wrong. The adjustment of deployment of security guards in those areas should not be adjusted during graveyard shifts because it’s an opportunity for criminals,” Cascolan said.

Cascolan also stressed that the security personnel of the Resorts World Manila lacked training in responding to an emergency crisis.

He said all establishments, especially those operating 24/7, should have its own emergency response teams that can spring into action without waiting for police assistance.

Majority of the establishment’s security were hired through N.C. Lanting Security Specialist Agency.

Espino said they will recommend sanctions once the SOSIA is done evaluating the reaction of the agencies during the deadly incident.

Police officials held a coordinating conference with private security agency managers and officers of malls, resorts and hotels at the PNP headquarters in Camp Crame on Tuesday.

After the Resorts World attack, Espino said the SOSIA will now require all establishments to submit their security and disaster plan for PNP’s review./ac