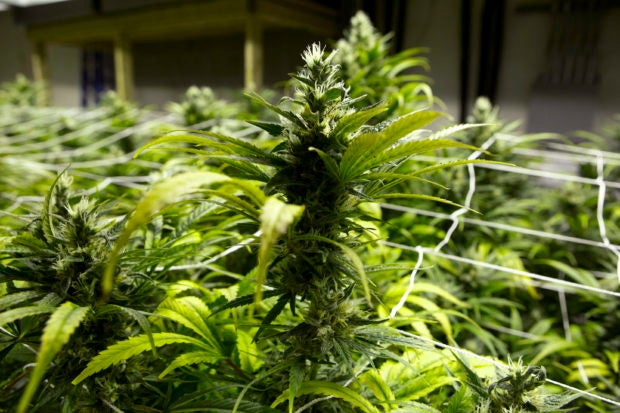 This Jan. 26, 2013 file photo taken at a grow house in Denver shows marijuana plants ready to be harvested. A pot farm has been sued by a neighboring horse farm owners for smells and other nuisances that could harm their property values. The 10th US Circuit Court of Appeals ruling Wednesday, June 7, 2017, revives a lawsuit between a Colorado horse farm and a neighboring marijuana company. (AP Photo/Ed Andrieski, File)

DENVER—A pot farm’s neighbor can sue them for smells and other nuisances that could harm their property values, a federal appeals court ruled Wednesday.

The 10th US Circuit Court of Appeals ruling revives a lawsuit between a Colorado horse farm and a neighboring marijuana-growing warehouse.

The horse farm’s owners, the Reillys, sued in 2015, claiming that the pot-growing warehouse would diminish their land’s value by emitting “noxious odors” and attracting unsavory visitors. A federal district court dismissed the Reillys’ claim, and the pot warehouse opened in 2016.

The horse farm owners appealed, and a three-judge appeals panel agreed Wednesday that their claims should be heard. But the judges said the Reillys can’t sue Colorado to force the state to enforce federal drug law and not allow the pot warehouse in the first place.

The southern Colorado horse-vs-pot case is interesting because the horse farm owners are trying to use a 1970 federal law crafted to fight organized crime. The Reillys say that federal racketeering laws entitle them to collect damages from the pot farm, even though the pot farm is legal under state law.

“The landowners have plausibly alleged at least one (racketeering) claim,” the judges wrote.

Pot opponents say the racketeering strategy gives them a possible tool to break an industry they oppose. It could give private citizens who oppose pot legalization a way to sue the industry out of business, even as federal officials have so far declined to shut down most pot businesses operating in violation of federal drug law.

“This is a tremendous victory for opponents of the marijuana industry,” said Brian Barnes, a Washington-based lawyer who represents the Reillys on behalf of the anti-crime nonprofit group Safe Streets Alliance.

Owners of the pot warehouse, owned by a company called Alternative Holistic Healing, did not immediately return a call for comment Wednesday. An attorney representing them in the case could not be reached, either.

The case now goes back to a federal district court that had earlier dismissed it.

The appeals panel handed pot opponents a defeat on another case Wednesday, however. The judges ruled that a lower court was right to dismiss a claim from a group of sheriffs in Colorado, Nebraska and Oklahoma, who had asked the federal court to block Colorado’s pot law. JPV

Read Next
Jury considers fate of man who traveled to Islamic State
EDITORS' PICK
Being a celebrity isn’t wholly an ‘advantage’ in the election, says Sotto
Acer starts the year off strong with the Aspire Vero National Geographic Edition
Octogenarian jailed for ‘stealing mangoes’ freed after people chip in for bail
Gov’t eyeing COVID-19 tests in pharmacies
Gear up and get ready to play with Yamaha Mio Gear
Over 3 Million worth of prizes to be won at Smart Padala’s SENDali Manalo Promo!
MOST READ
Natural immunity more potent than vaccines during US Delta wave—study
Mocha Uson, Michele Gumabao draw flak for running under party-list representing mothers
Bongbong Marcos-Sara Duterte tandem adds Zubiri, Gadon, Marcoleta to Senate slate
Help pours in for octogenarian jailed for ‘stealing’ mangoes in Pangasinan
Don't miss out on the latest news and information.