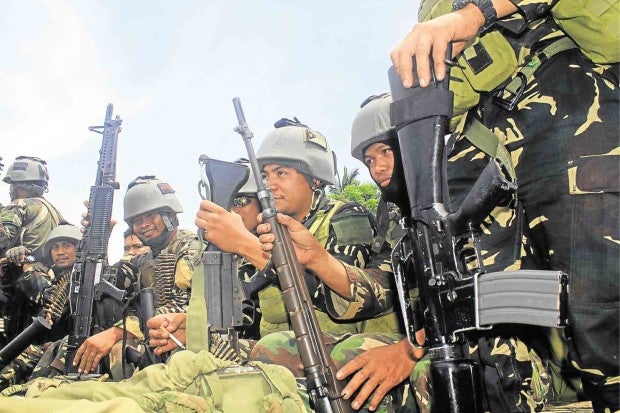 FILE – MEMBERS of the Army’s 103rd Brigade prepare to go to battle against members of the Maute Group in Lanao del Sur. RICHEL V. UMEL/INQUIRER MINDANAO

Government troops have surrounded and trapped the remaining Maute gunmen in the commercial district of Marawi, military officials said on Wednesday after President Duterte ordered security forces to crush the terrorists holed up in the city.

Brig. Gen. Restituto Padilla said the fighting was now concentrated in Barangay Bangolo, the city’s business district, where the gunmen from the Maute terror group had deployed snipers in an attempt to delay the advance of government forces.

“We are actually making headway. Their world is getting smaller. They are retreating and their supply of bullets won’t last,” Padilla said.

He said that, as of Tuesday evening, 134 terrorists and 39 troops had been killed in the fighting.

The civilian death toll has been estimated at between 20 and 38.

Soldiers also recovered 115 firearms from the terrorists while 1,545 civilians trapped in the fighting were rescued.

President Duterte has described the rampage in Marawi of the Maute group as a “rebellion” demanding a forceful response.

Speaking to troops on Tuesday as pictures of destruction in Marawi emerged in the media, Mr. Duterte ordered government forces to crush the terrorists.

On Wednesday, the President said he had rejected proposals for talks with the mother of Omarkhayyam and Abdulla Maute, the leaders of the terror group that had pledged allegiance to the Islamic State (IS) jihadi group now on a back foot in Iraq and Syria.

Mr. Duterte said he rejected the proposal because he had already lost too many soldiers and policemen in the two-week-old battle with the terrorists.

Mr. Duterte did not name the Maute matriarch, but earlier reports identified her as Farhana Maute.

Mr. Duterte said the terrorists in Marawi would not win, “not in a million years.”

He described the conflict in Marawi as just a “disturbance,” although he declared martial law in all of Mindanao after the Maute group laid siege to the city on May 23.

Lt. Gen. Carlito Galvez, chief of the military’s Western Mindanao Command, said the area controlled by the terrorists was around “3 kilometers [long] and 3 kilometers wide.”

“At the rate things are going, we’re OK…it’s just that there are [terrorist] strongholds that sometimes take four days to overrun,” Galvez said.

“We’re very cautious. I mean, it’s a built-up area and if you go in unprepared, then they’re really going to pounce on you,” he added.

The fighting in Marawi erupted on May 23 after the military and the police tried to arrest Abu Sayyaf leader Isnilon Hapilon in Barangay Basak Malutlut but were repulsed by the Abu Sayyaf bandits and their Maute supporters.

After more than two weeks of fighting, the terrorists are  holed up in Barangay Bangolo.

Acting Interior Secretary Catalino Cuy said the Department of the Interior and Local Government (DILG) was helping around 70,000 people who had fled Marawi and taken shelter in  surrounding provinces and cities.

DILG Northern Mindanao Regional Director Arnel Agabe said there was a sufficient supply of relief goods for evacuees in Lanao del Norte due to donations and support from other areas.

Representatives of groups that supported Mr. Duterte in his campaign for Malacañang last year on Wednesday called on the people who voted for him to help the evacuees.

Interior Undersecretary Jesus Hinlo of the Mayor Rodrigo Duterte National Executive Coordinating Committee said donations could be sent through the Department of Social Welfare and Development. —WITH A REPORT FROM JODEE A. AGONCILLO AND AFP