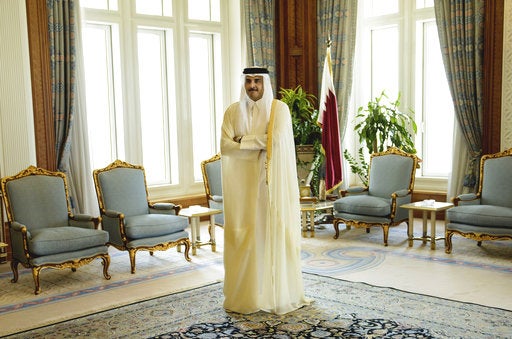 FILE — In this Aug. 3, 2015 file photo, Qatar Emir Sheik Tamim bin Hamad Al-Thani waits for the arrival of U.S. Secretary of State John Kerry ahead of their meeting, at Diwan Palace in Doha, Qatar. Four Arab nations have cut ties with Qatar over an escalating diplomatic battle over the country’s backing of Islamist groups and its relations with Iran. (Brendan Smialowski/Pool Photo via AP, File)

DUBAI, United Arab Emirates  – Saudi Arabia has closed the offices of Qatar’s Al-Jazeera news network after severing ties with the energy-rich Gulf nation, which it accuses of supporting terrorist groups.

In a statement carried by the state-run Saudi Press Agency on Monday, the Culture and Media Ministry said it withdrew the famed network’s license.

The ministry said the move came in response to Al-Jazeera’s “promotion of the terrorist organizations’ plots” and its alleged support for Yemen’s Houthi rebels, the target of a two-year-old Saudi-led military intervention.

It also accused the network of attempting to “split the Saudi ranks,” without elaborating.