Carpio: Fishermen harassed by Chinese at Panatag should be compensated
By: Gabriel Cardinoza - @inquirerdotnet
Philippine Daily Inquirer / 12:05 AM June 06, 2017 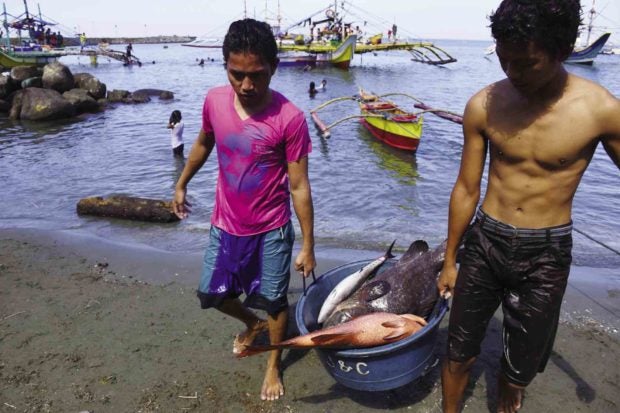 Fishermen in Infanta town in Pangasinan province depend on the rich fishing ground near the disputed Panatag Shoal in the West Philippine Sea for their livelihood. —WILLIE LOMIBAO

Supreme Court Senior Associate Justice Antonio Carpio on Monday said the government should seek damages from China for harassing Filipino fishermen at Panatag Shoal, by pursuing a new complaint with the arbitral court in The Hague.

“The ruling of the tribunal stated that Scarborough [Panatag] Shoal is a common fishing ground of Filipinos, Vietnamese and Chinese, including the lagoon,” Carpio said during the Meet Inquirer Multimedia forum.

“So we have a right. Our fishermen have a right to go there and fish, outside the lagoon and within the lagoon, just like before,” he said.

He was referring to the July 2016 decision of the Permanent Court of Arbitration in The Hague that China’s “nine-dash line” was not valid.

The “nine-dash line” refers to China’s territorial claims in the South China Sea, which were demarcated by nine dashes on new Chinese maps.

“If they [Filipino fishermen] are stopped by China, then we should go back to the arbitral tribunal and ask that China comply with the ruling or pay damages to them,” he said.

Last week, fishermen from Infanta town in Pangasinan province said they were bullied into sharing their catch with members of the Chinese Coast Guard during a fishing trip to the disputed shoal.

Filipino fishermen, who were denied access to Panatag in 2012, were able to fish there again in October last year after President Duterte’s visit to China.

Fishermen used to be driven out of the shoal by Chinese patrol boats by ramming their outriggers with rubber boats or by using water cannons.

In August 2015, 16 fishermen from Infanta asked the United Nations High Commissioner for Human Rights to direct China to respect their rights to their traditional fishing grounds at Panatag Shoal.

The fishermen have yet to hear from the UN body.

Charlito Maniago, Barangay Cato chair in Infanta, said incidents at the shoal were not formally reported to the authorities.

“These stories only came out when the media came or called me to ask,” he said.

Carpio said fishermen should have reported the bullying incident to their mayor, who, in turn, should have filed a report with the Philippine Coast Guard (PCG).

The PCG would be expected to transmit the report to the Bureau of Fisheries and Aquatic Resources, and then to the President, he said.

“It will still boil down to a decision. What do we do? My advice is, let’s go to a peaceful resolution. Bring the case back to the tribunal because we can demand damages,” Carpio said.

He said: “It’s very clear that they (Chinese) are not complying with the ruling of the tribunal. They’re allowing us to fish outside of the lagoon but they’re still harassing our fishermen. So we should go back to the tribunal if we really care for our fishermen.”

According to him, filing a complaint with the arbitral court was not a confrontational act. Under the UN charter, arbitration is a peaceful means of settling disputes, he said.

“China is a member of the World Trade Organization. It has sued many countries for arbitration and China is marketing Beijing as a center of commercial arbitration,” Carpio said.

“So arbitration is not an unfriendly act. It’s a friendly act. This government should file another case, demand damages from China for preventing our fishermen from fishing in Scarborough Shoal,” he said.