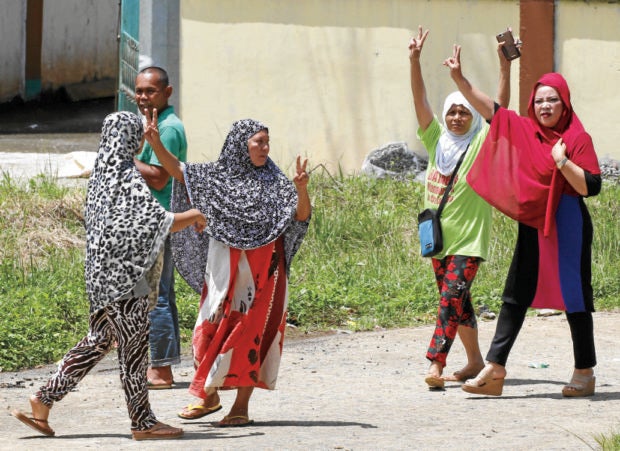 Villagers flash a “peace” sign as government troops arrive to secure their community in the outskirts of Marawi city Tuesday, May 30, 2017 in southern Philippines. (AP Photo/Bullit Marquez)

The military on Sunday declared a four-hour “humanitarian ceasefire” in Marawi City to allow relief distribution, rescue trapped civilians, and reach out to those in need.

“It’s a humanitarian pause initiated and led by Chairperson Irene Santiago of our peace panel and approved by Gen Eduardo Año, the Chief of Staff, to allow the entry of humanitarians from the LGU, the NGOs and CSOs in order to reach trapped residents and those needing assistance in the area of conflict,” Armed Forces of the Philippines spokesperson Brig. Gen. Restituto Padilla said.

But the military did not approve the entry of volunteers and rescuers into high risk areas to avoid putting them in danger.

Nearly 200 people, including state forces, terrorists and civilians, have been killed since the fighting began almost two weeks ago. President Rodrigo Duterte also declared martial law in the entire Mindanao as a response to the crisis.

Thousands have fled the city since then. The government also failed to meet the June 2 deadline to flush out the terrorists occupying the center of the city.

On Saturday, Defense Secretary Delfin Lorenzana told INQUIRER.net that there are still about 1,000 residents trapped in the city, which prevented the military from going all-out.

“We don’t want them caught in the crossfire. It will be over soon,” he said.

Lorenzana also refused to set up a new deadline and said he will leave it to the ground commanders instead.

“I told them to clear Marawi ASAP. They know what to do,” he said. JE/rga

Fighting erupts after opening of ‘peace corridor’ in Marawi