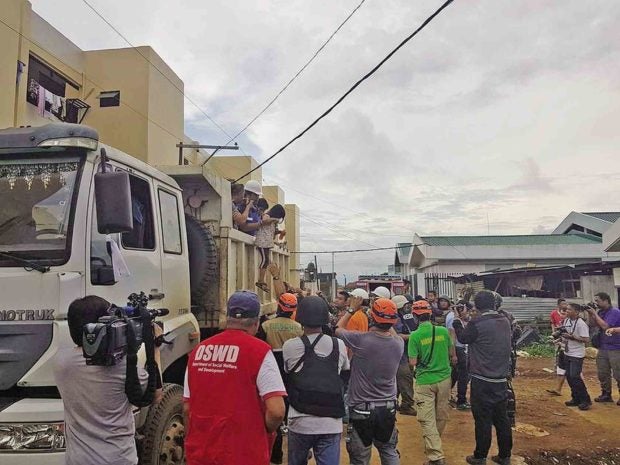 Trapped civilians after they were rescued by volunteers in Marawi City on Saturday. —Photo from Naguib Sinarimbo’s Facebook account

ILIGAN CITY — For 10 days, Maranao resident Norodin Lucman sheltered 71 Christian workers, whom he managed to lead out of Marawi City on Saturday. He also tagged along dozens of other civilians who were trapped in the eastern side of the city.

Also plucked out and now at CMC inside the provincial capitol in Marawi City were 33 teachers of Dansalan College, said Sinarimbo, one of the civilian rescue volunteers who had banded together to extract trapped civilians in Marawi.

As of Saturday, the official tally of rescued individuals was 1,236, said Brig. Gen. Rolando Bautista, the commander of Task Force Marawi.

But an unidentified civilian — who was among over 180 people either trapped in the fighting or held hostage by the Maute group in Marawi City’s Banggolo area — was shot dead by the gunmen for trying to escape, said Col. Jo-ar Herrera, the spokesperson of the Army’s 1st Infantry Division.

“One civilian who tried to escape from captivity on Friday was shot dead,” Herrera said.

In a separate statement, the Western Mindanao Command (Westmincom) said: “A civilian about to be rescued was shot dead by enemy snipers as he was about to approach government troops.”

The fresh civilian death brought to 21 the number of noncombatants killed by the Maute gunmen as of Saturday.

Four others, who also escaped, were now among the 184 civilians that soldiers and volunteers had brought to the provincial capitol.

“They were given food and medical assistance by the provincial government of Lanao del Sur,” Herrera said.

Based on its latest bulletin, the International Committee of the Red Cross said it was also continuing with its efforts to rescue more civilians trapped in the crossfire between government forces and Maute gunmen.

The international aid group said that despite the large number of people being led out of the besieged city during the past days, an estimated 2,000 individuals still needed to be plucked out even as the military continued its offensives.

Among them were the more than 30 civilians trapped in Raya Madaya along Perez Street in Marawi City.

Mary Joy Marjalino, whose husband Rumar was among those trapped said she had lost contact with him. So did Aleta Esperat, wife of trapped construction worker Jimmy Esperat.

The two women said they last contacted their spouses on May 30, during which the men said that bombs were exploding near their location. They also said their mobile phones were running low on battery.

Lt. Gen. Carlito Galvez Jr., Westmincom commander, said their commitment was to rescue all trapped civilians and those held captive by the gunmen “as we clear the city street by street, building by building, room by room and inch by inch in order to neutralize all armed threats so that peace will reign in Marawi again.”

On Saturday, helicopter gunships rained bombs anew on the suspected positions of the extremists.

Herrera said 120 gunmen so far had been confirmed killed since the fighting started on May 23.

The government also lost 35 men—including the 10 soldiers who perished in what the military described as “friendly fire.”

“The artillery rounds and airstrikes will continue along with ground operations. These will focus on the barangay of Banggolo,” Herrera said, adding that the military’s operation will be sustained with the arrival of more troops, backed by armored vehicles.  —RICHEL UMEL AND JULIE ALIPALA