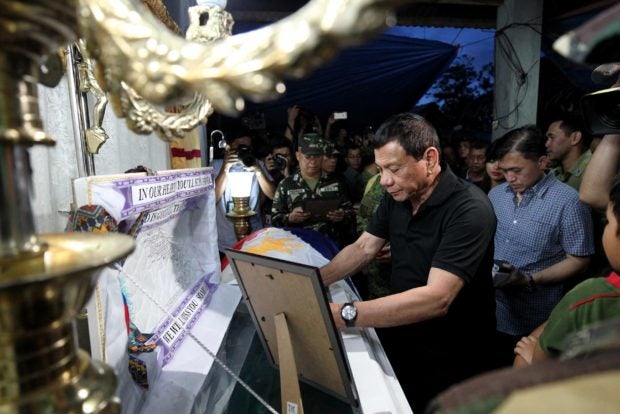 MARAWI, Lanao del Sur — Dozens of people dashed to freedom through a terrifying gauntlet of military airstrikes and Islamist gunmen on Saturday, nearly two weeks after being trapped in a deadly battle for this Philippine city.

One group of 38 ran from their hiding places in a part of Marawi City controlled by self-styled Islamic State (IS) group gunmen as soldiers seized a key bridge in the area to give the civilians safe passage.

“We lay on the floor in the dark each night whenever we heard gunshots or explosions. We barricaded the doors with furniture and a refrigerator,” high school teacher Jerona Sedrome, 27, told the French news agency Agence France-Presse (AFP).

“IS tried to force their way into the house and got in at the second attempt, so we hid in a tunnel beneath the house,” she added.

Col. Jo-ar Herrera, spokesperson for the Army’s 1st Infantry Division, said one hostage who was among 180 people trapped in the fighting or being held hostage in Marawi’s Banggolo area, was killed by the gunmen as he tried to escape.

Hundreds of gunmen rampaged through the predominantly Muslim city of 200,000 on May 23 after government forces attempted to arrest their leader, Isnilon Hapilon.

Up to 50 gunmen continued to control downtown Marawi nearly two weeks later with hostages, including a Catholic priest, using some as human shields, the military said.

As many as 2,000 people also remained trapped in desperate conditions in these areas, likely without food and water and with some injured or ailing as security forces mount a relentless assault, the government said.

The military said it was firing artillery and rockets from the air, and dropping conventional bombs, as ground forces in armored vehicles fight their way in dodging sniper fire, improvised explosives and antitank rockets.

At least 70 people were rescued on Saturday as intense fighting continued, including 33 teachers from Dansalan College, who were with a year-old baby, seven other children and seven other adults.

The teachers recounted to AFP between tears and gulps of coffee and bottled water how they survived on steamed rice and rainwater.

“If it didn’t rain we had no water and we didn’t eat,” said Sedrome’s younger sister and fellow teacher, Jane Rose Sedrome, 25.

The elder sister said they secretly communicated with government rescuers by text messages and made their break for freedom when informed the gunmen had been driven away from the bridge.

But they had to go through the sniper alley of Banggolo, the city’s old quarter which is one of the targets of the day and night airstrikes.

“We passed through three corpses being eaten by maggots. They smelled really bad,” fellow teacher Regene Apao, 23, told AFP. “We knew they were IS because they wore black clothing and black head masks.”

Arnold Balo, 28, an ice cream factory worker, said he cradled a boy in one hand and carried a half-meter long machete in the other, their only protection from the gunmen.

At one point during their sprint for freedom, a gunman perched near the top of a building aimed a sniper rifle at him and ordered him to put his weapon on the ground, Balo said.

“I will do as you order sir. Please don’t kill us,” he said he told the gunman. Balo said he put the machete down and the gunman allowed the group to pass.

Brig. Gen. Rolando Bautista, the commander of Task Force Marawi, said the death of the man who was shot trying to escape brought to 21 the number of civilians killed by the gunmen as of Saturday.

The military reported 120 gunmen had been confirmed killed since the fighting erupted on May 23. The government lost 35 men—including the 10 soldiers who were accidentally killed during a bomb run on Wednesday.

Bautista said 1,236 had been rescued.

Those still trapped in the city awaiting rescue included more than 30 in Raya Madaya on Perez St., relatives told the Inquirer.

Mary Joy Marjalino and Aleta Esperat said their respective husbands, Rumar and Jimmy, were among them. Their husbands last contacted them on May 30, saying their mobile phones’ batteries were running low.

Lt. Gen. Carlito Galvez Jr., commander of the military’s Western Mindanao Command, said government forces were committed to rescue all those trapped in Marawi as they cleared the city “street by street, building by building, room by room and inch by inch in order to neutralize all armed threats so that peace will reign in Marawi again.”

Lawyer Naguib Sinarimbo, who helps run the operations center of the Lanao del Sur Crisis Management Committee, said a Marawi resident, Norodin Lucman, on his own, had led 71 Christian workers he had sheltered out of Marawi City on Saturday along with dozens of other civilians who were trapped in the eastern side of the city.

He said Lucman braved sniper fire from the gunmen “and [not so] friendly fires from government forces.”

Marawi City natives and rights groups have called on the military to stop the airstrikes and expressed fears about the martial law declaration in the whole of Mindanao by President Duterte on the first day of the crisis.

In a forum on the implications of martial law in Quezon City on Friday, Zahria Muti-Mapandi of the Al-Mujadilah Development Foundation Inc., whose family was in Marawi when the siege began, said everyone who had fled the city left a loved one behind.

“All of us want to go back to Marawi after this. Just because of the actions of a small group, the response has been too soon and too harsh,” Muti-Mapandi said.

The Commission on Human Rights (CHR) supported the proposal at the forum by former CHR chair Etta Rosales to petition the government to end airstrikes.

Jacqueline Anne de Guia, CHR Director for Public Affairs, said airstrikes that killed soldiers showed it was not “a viable option or feasible one.”

“Airstrikes were considered to ensure minimal impact. But because of recent casualties, they should revisit the next viable or sound strategy to counter terrorism without sacrificing the lives of soldiers or civilians,” De Guia said. —REPORTS FROM RICHEL UMEL, JULIE ALIPALA, JAYMEE T. GAMIL AND AFP