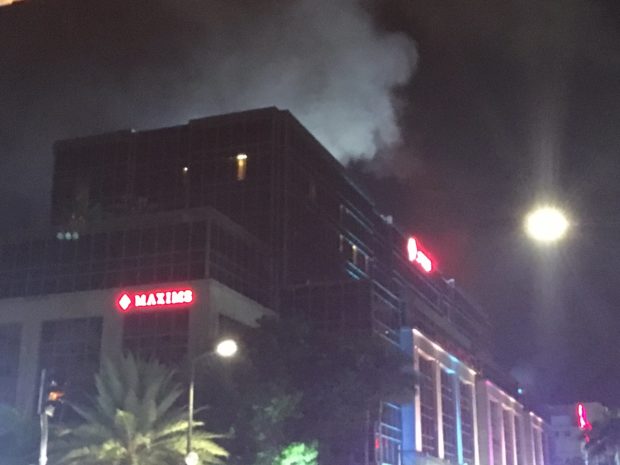 Thick smoke comes out of the top floor of Resorts World Manila on Friday, June 2, 2017. Gunshots were allegedly heard by people inside the casino area. (Photo by DEXTER CABALZA / Philippine Daily Inquirer)

Here is a timeline of the attack at the Resorts World Manila (RWM) in Pasay City on Friday, June 20, 2017, based on information from Inquirer multiplatform reports, the SITE Intel Group, and the official Facebook pages of Resorts World Manila and the US Embassy in Manila.

1:47 a.m.– RWM security says some guests of connected Maxims Hotel are evacuated and nearby Marriott Hotel and Remington Hotel are placed on lockdown by police.

2:05 a.m.– RWM announces on its official Facebook page that the establishment is on lockdown.

3:29 a.m. – US Embassy in Manila, through its official Facebook page, advises citizens to exercise caution, monitor local news and heed instructions given by local authorities.

3:46 a.m.– RWM says operations of the Philippine National Police (PNP) are ongoing and details cannot be shared that may jeopardize their movement.

4:08 a.m. – Director General Ronald de la Rosa, PNP chief, rules out terrorism in the attack. He adds that, after gunman stole casino chips and burned casino tables, the suspect sets himself on fire.

7:50 a.m. –  RWM says it will defer to PNP for official announcements and updates on the details of ongoing operations.

8:14 a.m.– PNP sends to media the CCTV screenshots of gunman behind the attack.

8:40 a.m.– Southern Police District (SPD) releases photo to media the charred remains of the gunman after he set himself on fire at Room 510.

10:31 A.M- In a statement, Presidential Spokesperson Ernesto Abella advises people to refrain from going to the area as the safety and security of everyone are of primary concern.

10:58 a.m.– RWM says it has extended medical assistance to 54 individuals who were taken to nearby hopsitals.

11:03 a.m.– Palace extends its deep condolences to the families and friends of the victims of RWM attack.

11:58 a.m.– In a Palace media briefing, Director Oscar Albayalde, chief of the National Capital Region Police Office (NCRPO), says deaths due to suffocation rises to 36; 37th killed is the gunman.

12:12 P.M.– In an interview with media, RWM COO Stephen Reilly says security did not engage gunman so as not to escalate situation, adding that security detail is not equipped with firearms.

1:06 PM- RWM says it cannot release information on the identities of the victims at this time as the managamennt awaits SOCO’s final confirmation.

3:21 P.M.– In a media briefing, RWM officials provide names of some employees and guests who died due to suffocation. Reilly reiterates that there is only one gunman in the attack. /atm