Wife of Pampanga solon one of Resorts World attack fatalities 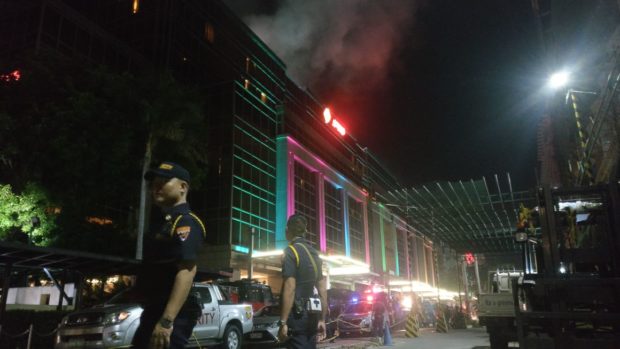 Smoke coming out of the building of the Resorts World Manila. AP PHOTO

One of the 38 people who died of suffocation in the early Friday attack by a lone gunman at Resorts World Manila was the wife of a House member .

Fariñas divulged this to reporters after receiving a text message from Director General Ronald de la Rosa, chief of the Philippine National Police.

The grieving Gonzales’ family could not be reached for comment.

Dela Rosa also told Fariñas that the police were still locating the victim’s sister, Consolacion Mijares, and that there was no report as to her whereabouts.

Mijares, however, was not on the list of confirmed fatalities released on Friday afternoon (see list below).

Rep. Gonzales is the vice chair of the House public works and highways committee and a deputy majority leader. He is a member of the ruling Partido Demokratiko Pilipino-Laban party.

During the casino attack, the gunman also shot at a LED television monitor but did not shoot at the casino goers. Most of those who died suffocated in the smoke, the police said.

The suspect then holed himself up in one of the hotel rooms and then set himself on fire.

Dela Rosa deemed the attack as a robbery instead of a terrorist attack.

As of 3 p.m. Friday, hotel officials announced the identities of 29 of the 37 casualties.

(*Two employees have yet to be identified.)

(Four guests have yet to be identified. Later on Friday, police added two more fatalities, both unidentified.) /JPV /atm