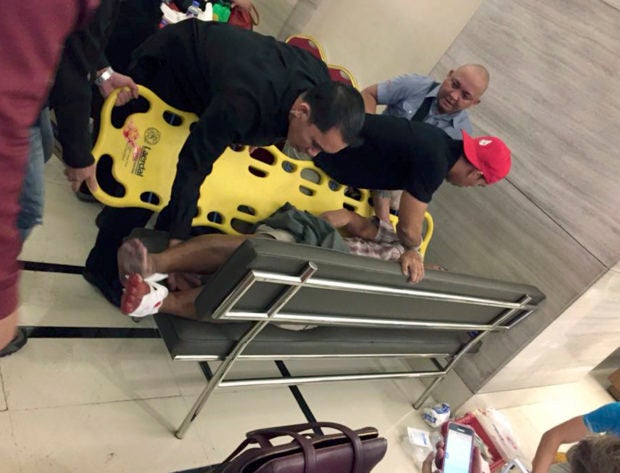 An injured man is placed on a stretcher after explosions rang out early Friday, June 2, 2017, at the Resorts World Manila complex near Manila’s international airport in the Philippine capital, sparking a security alarm amid an ongoing Muslim militant siege in the country’s south. (Tikos Low via AP)

(Updated, 12:10 a.m.) The number of fatalities at the Resorts World Manila attack on early Friday has risen to 37, a ranking police official said.

“Victims who suffered suffocation already went to 36, plus the suspect, that makes the body count to 37,” National Capital Region chief PCSupt. Oscar Albayalde told reporters during a Palace briefing.

Albayalde said that most of the fatalities were found in the gaming area.

“We cannot release information on the identities of the victims at this time as we are awaiting SOCO’s final confirmation,” a Resorts World Manila statement said. The company said they will inform the next of kin of the victims as soon as they get the names.

Radyo Inquirer 990AM reported that of the 35 victims, 22 were hotel or casino guests while 13 were employees.

An Inquirer reporter earlier quoted Southern Police District (SPD) director Chief Supt. Tomas Apolinario as saying that at least 25 people were found on the 2nd and 8th floors of the establishment.

A lone gunman, described to be foreign looking, stormed into the hotel’s casino, fired shots and stole chips. He then holed up inside one of the hotel’s rooms on the fifth floor then set himself on fire.

Aside from the 37 fatalities, at least 54 were also said to be hurt in the incident.

Philippine National Police chief Dir. Gen. Ronald “Bato” dela Rosa ruled out terrorism as the motive behind the attack. With a report from Dexter Cabalza/rga