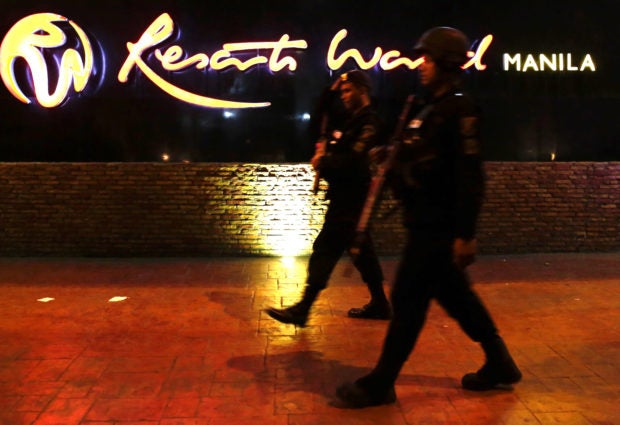 Police patrol outside a hotel at the Resorts World Manila complex, early Friday, June 2, 2017, in Manila, Philippines. Gunshots and explosions rang out early Friday at a mall, casino and hotel complex near Manila’s international airport in the Philippine capital. AP

What started as reports of fire and gunshots at Resorts World Manila past midnight was later confirmed to be an attack by a lone gunman who allegedly stole millions worth of casino chips.

The gunman eventually committed suicide while more than 30 people died due to smoke inhalation.

Reports from various government units, as well as officials of the hotel casino, continue to arrive.

Here is what we know about the attack:

At around 12 midnight on June 2, a foreign-looking man carrying an M4 rifle entered the second floor of Resorts World Manila. He was seen on a security footage ignoring a guard who questioned him at the entrance of the establishment. He doused gambling tables with petroleum fuel and set them on fire but did not shoot anyone.

The gunman hid in Room 510 of Maxim’s Hotel and set himself on fire (Source: Dela Rosa). He also shot himself in the head (Source: NCRPO chief Chief Supt. Oscar Albayalde).

The bag of gambling chips worth 113 million pesos ($226,000) was found inside a toilet (Source: Associated Press).

At least 36 people died due to suffocation from the fire’s smoke (Source: Albayalde). Most of them were found in the gaming area.

Resorts World Manila also said that of the 35 confirmed dead, 22 were guests while 13 were employees.

A security guard suffered a self-inflicted gunshot wound after he panicked and accidentally shot himself (Source: Dela Rosa).

Around 70 people suffered minor injuries during a stampede to escape from the building. Some people even smashed windows to escape (Source: Associated Press interview with eyewitness).

The police have insisted that it is not a terrorist attack. Dela Rosa said, “If he was a terrorist, if he was ISIS he should have gunned down people there.” KS/JPV/rga