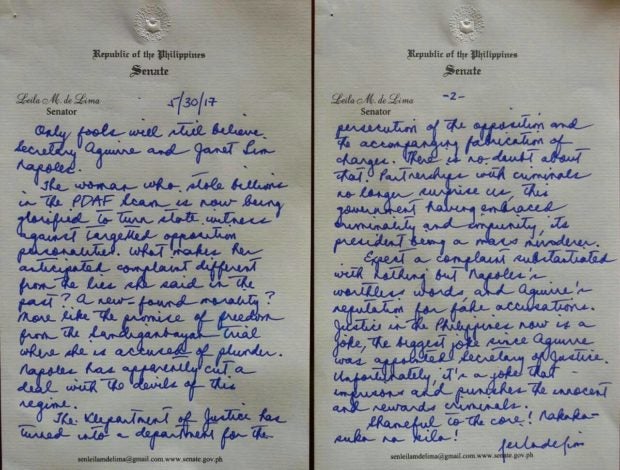 These are copies of Senator Leila de Lima’s handwritten notes issued to the media Tuesday (May 30, 2017) in reaction to the plan of the government to file fresh charges against opposition personalities including her. De Lima wrote the statement in her detention cell in Camp Crame. OFFICE OF SEN. LEILA DE LIMA

Senator Leila de Lima unleashed fresh attacks on Tuesday against Justice Secretary Vitaliano Aguirre II after the latter disclosed an alleged plan to file charges against her and other personalities in connection with the “pork barrel” scam.

“Only fools will still believe Secretary Aguirre and Janet Lim Napoles,” De Lima, who has been detained at Camp Crame in Quezon City on drug charges, said in a statement.

“The woman who stole billions in the PDAF scam is now being glorified to turn state witness against targeted opposition personalities. What makes her anticipated complaint different from the lies she said in the past? A new-found morality?” De Lima asked.

PDAP is lawmakers’ Priority Development Assistance Fund also known as “pork barrel,” which was declared unconstitutional by the Supreme Court.

“More like the promise of freedom from the Sandiganbayan trial where she is accused of plunder. Napoles has apparently cut a deal with the devils of this regime,” she said.

READ: Aguirre: Napoles may be state witness in new, not pending, cases

The detained senator lamented that the Department of Justice, now being headed by Aguirre, has turned into a “department for the persecution of the opposition and the accompanying fabrication of charges.”

“There is no doubt about that. Partnerships with criminals no longer surprise us, this government having embraced criminality and impunity, its president being a mass murderer,” De Lima said.

“Expect a complaint substantiated with nothing but Napoles’ worthless words, and Aguirre’s reputation for fake accusations,” she said in an apparent reference to the case that the businesswoman was allegedly planning to file against them.

“Justice in the Philippines now is a joke, the biggest joke since Aguirre was appointed Secretary of Justice. Unfortunately, it’s a joke that imprisons and punishes the innocent and rewards criminals. Shameful to the core! Nakakasuka na sila! (they make me nauseous!) ” the lady senator added. JPV/rga