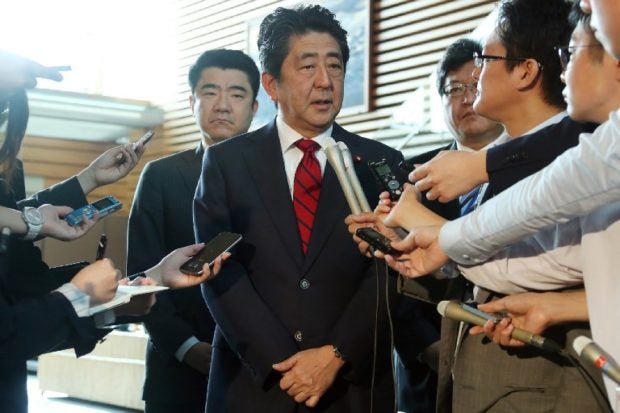 Japan’s Prime Minister Shinzo Abe (center) speaks to reporters at his official residence in Tokyo on May 29, 2017, after North Korea test-fired another ballistic missile that fell into the Sea of Japan. Abe swiftly condemned Monday’s launch and vowed “concrete action” with the US. AFP

SEOUL, South Korea — North Korea confirmed its recent test-firing of a ballistic missile was “successful”, the state-run news agency KCNA reported Tuesday, a day after the projectile landed in waters close to Japan.

North Korean leader Kim Jong-Un “guided” the launch — the third missile test by the nuclear-armed regime in less than three weeks — which was carried out in defiance of UN sanctions warnings and US threats of possible military action.

“The ballistic rocket flew toward the east sky where the day broke and correctly hit a planned target point… after flying over the middle shooting range,” the report said.

The missile test triggered swift condemnation from US President Donald Trump who said it showed “disrespect” for neighboring China, the North’s sole major ally, which has sought to dampen tensions over Pyongyang’s weapons program.

Several rounds of UN sanctions have done little to stop the isolated regime from pushing ahead with its ambition to develop an intercontinental ballistic missile (ICBM) that can deliver a nuclear warhead to the continental US. CBB