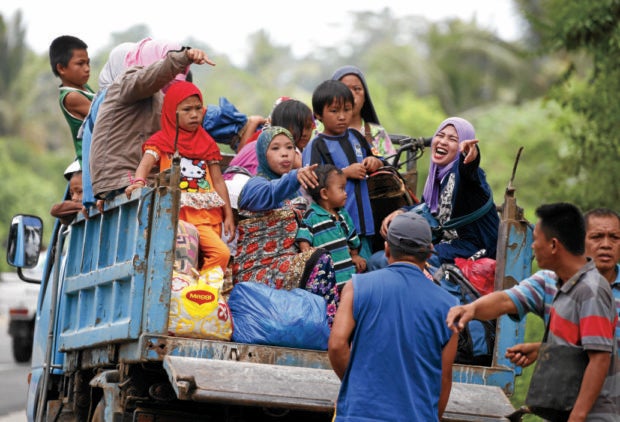 Displaced residents ride a mini-truck with their belongings while fleeing to safer areas as government troops battle with Muslim militants Monday, May 29, 2017 in Marawi, southern Philippines. Philippine forces say they now control most of the southern city where militants linked to the Islamic State group launched a bloody siege nearly a week ago. Presidential Spokesman Ernesto Abella said on May 29, 2017, that only small areas of Marawi were under militants’ control. (AP FILE PHOTO/BULLIT MARQUEZ)

MARAWI CITY – Muslim clerics have appealed to President Duterte to stop the aerial assaults in Marawi City so civilian lives and buildings could be spared.

The National Ulama Conference of the Philippines, in a statement released on Monday, said government forces now conducting combat operations in some areas in Marawi must continue with its ground attack instead of resorting to bombing sorties.

“We implore (President Duterte) to cease immediately the airstrike but to employ land attack with the help of local military and police so that civilians will be protected and escorted to evacuation centers,” the Ulama said.

The group has also implored national government agencies such as the social welfare and health departments to respond to the humanitarian needs of the Marawi residents, most of whom are Maranaos, who have evacuated due to the fighting there since last Tuesday.

“This is the time, Mr. President, to show us what you’ve been saying that you have a Maranao blood, and that, that you are sincere about correcting the historical injustices committed against the Moros,” it added.  SFM