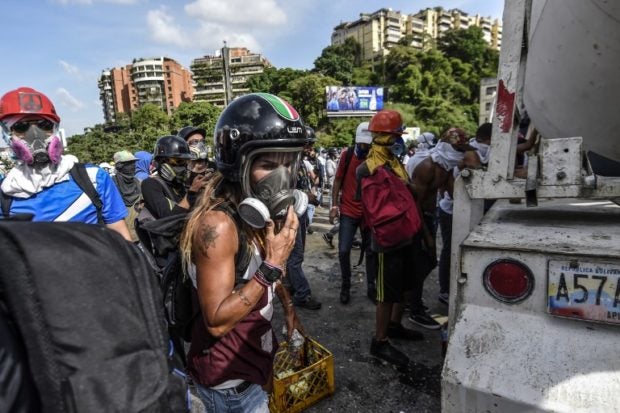 Anti-government protesters block the Francisco Fajardo highway in Caracas during a demonstration against Venezuelan President Nicolas Maduro on May 27, 2017.
Demonstrations that got underway in late March have claimed the lives of 58 people, as opposition leaders seek to ramp up pressure on Venezuela’s leftist president, whose already-low popularity has cratered amid ongoing shortages of food and medicines, among other economic woes. / AFP PHOTO / JUAN BARRETO

Demonstrators are demanding elections to get rid of a socialist government they blame for food and medicine shortages. The government brands them “insurgents” and “terrorists.”

Here are five striking faces of the antigovernment street protests, during which 57 people have been killed over the past two months.

With a rock in her fist, her tanned and muscly thighs and arms braced to hurl it at police, fitness instructor Caterina Ciarcelluti became an image of strength and determination in the protests.

Agence France-Presse (AFP) photographer Federico Parra’s closeup of her in a motorcycle helmet, red vest and denim hot pants on May 1 spread on social media, helping her earn the name “Wonder Woman.”

“That is me all over, the strength and the passion,” Ciarcelluti, 44, said. “I never run out of energy.”

She said she hoped to be “an inspiration” to other protesters. “We are getting there.”

Wearing nothing but white sports shoes and socks, a money belt and an anguished expression, Hans Wuerich, 27, raised a Bible in his skinny hand as he stood on top of a police armored car on April 20.

Striding among the riot cops with his pimply back and hairy buttocks only momentarily masked by clouds of tear gas, a viral protest star was born.

Although he does not support the mainstream opposition, he says he regrets having voted for Maduro, whom he accuses of “repression.”

He wanted to send a peaceful message so that “the world would turn its gaze for a moment” on Venezuela.

Rubber bullets struck his back as he climbed off the tank.

“I’m not some flower-power hippy,” he said later. “But I do believe that peaceful protest does more harm to the government than violence. I stunned them.”

“It hurt me to see how they were firing at the kids,” she said later, referring to the rubber bullets and tear gas used by police against protesters.

She kicked one of them away and stood holding a handkerchief over her face as they warned her off through a megaphone.

Police on a motorbike eventually took her away before later releasing her.

While some of the icons of the protests inspired courage, others provoked terror.

Victor Salazar, a 28-year-old student, went up in a ball of flame after a police motorcycle that protesters were destroying exploded on May 3.

Standing a few meters away from him, photographers Juan Barreto and Ronaldo Schemidt captured the moment when Salazar ran burning, screaming for help until other protesters put out the flames.

From his hospital bed where he lay in bandages later, Salazar sent a video urging protesters: “Get out into the street, not for me but for Venezuela.”

Through clouds of tear gas, Wuilly Arteaga wove calmly with his violin on his shoulder, playing the classic Venezuelan folk song “Alma Llanera.”

Immortalized in photographs from that performance during a demonstration on May 8, the 23-year-old said he meant it as a “message of peace.”

Three days earlier, Arteaga had played at the funeral of a fellow musician killed during the protests, who, like Arteaga, had trained in an orchestra for poor children.

“I felt very afraid. I didn’t think music had so much power to make people think,” he told AFP. “But after the cemetery, I went along to the demonstration with more courage.”

This week, a new photograph appeared of him crying and holding a broken violin. A military policeman had snatched it by the strings.

Messages of support flooded social media and within hours he appeared in an online video playing a new violin donated by a well-wisher. —AFP