Terrorists in their teens, say evacuees 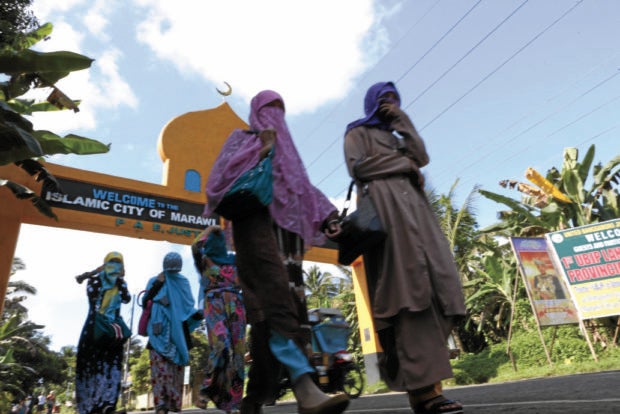 MOVING OUT Residents in the predominantly Muslim city of Marawi leave as fighting intensifies between themilitary and terrorists. —JEOFFREY MAITEM

This was how evacuees described many of the Maute group terrorists who have besieged Marawi for a week now, prompting President Duterte to declare martial law for 60 days in all of Mindanao and sending thousands of residents fleeing the city.

The boldness, daring and playfulness may be owing to their young age. The youngest of the terrorists is estimated to be 13 years old.

The evacuees said many of the terrorists they saw while fleeing to safety on Wednesday were younger than 20.

“They are just barely out of their teens. And they take orders from boys in their early to mid-20s,” said a certain Norma, a Maranao government worker in her 50s.

“That is why I addressed most of them as orak (boy) when I talked with them while my family and I walked out of Marawi the day after the siege started,” she said.

The Autonomous Region in Muslim Mindanao reported that 42,142 people had fled their homes as of Saturday.

Some 30,600 people were in evacuation centers, while 11,500 others were seeking shelter with relatives outside Marawi.

Around 2,200 were reported stranded in the city, where fighting is going on between government forces and the terrorists linked to the Islamic State (IS) group.

Norma said that on Wednesday, at the height of the siege, a group of boys belonging to “the blacks”—a reference to the black IS banner—looted a convenience store.

As the younger gunmen hauled the goods, the older ones sat lazily on the bench and the sofa, downing bottles of cold drinks and carrying out what sounded like an aimless conversation, Norma said.

She said several other boys laughed at her when she ducked after hearing distant gunfire as she and her family were asking them for a safe way out of the city.

“It’s as if they were only playing,” she said.

Faridah, another evacuee, recalled a conversation with young boys in Butig town. She said she tried to talk them out of joining the terrorists but was told that “joining the jihad is our way of taking a shortcut to heaven.”

“I really wonder if they realize the implications of what they are doing,” Faridah said. “The boldness and daring that are inherent with youth are being exploited to advance aims that these boys do not understand.”

Evacuees said that around 3 p.m. on Tuesday, fighting broke out between government troops and the terrorists near an apartment believed to be the hideout of Abu Sayyaf leader Isnilon Hapilon, who had reportedly pledged allegiance to IS.

The firefight led to a series of clashes that would engulf other villages of Marawi.

The emergence of hundreds of terrorists to engage government forces in various parts of the city and the attacks on selected targets indicated these actions were well planned.

At the first burst of gunfire, employees at a nearby gun store immediately rolled down the establishment’s steel doors.

But about 10 gunmen barged into the store, held its owner and employees at gunpoint and hauled the guns and ammunition, an employee said.

Norma, who was in Banggolo district to visit a relative, said police outposts were simultaneously attacked and looted.

By 5 p.m., the gunmen had barricaded the roads in Banggolo district and had planted an IS flag at Plaza Cabili.

The next day, the residents woke up to a recorded announcement in Filipino blaring from an IS flag-bearing police car commandeered by a militant.

Soon, people began pouring out of their houses.

“I ventured around Banggolo to see what’s really happening. I was still unconvinced as the events seemed like scenes in a movie,” Norma said.

At one street corner, she saw evacuees being questioned by the young terrorists. They were being asked to recite verses from the Quran, she said.

Norma said she also saw a man in his early 20s shot pointblank and several people picked from a line and taken into a house.

Norma said the militants styled themselves as the people’s protector, reminding them to “avoid as much as possible the Army.”

The terrorists told the residents that Army troops killed several religious people and niqab-wearing women in Basak, she said.

Norma said many of the gunmen showed signs they were not locals. She said she saw about 10 bearded men who appeared to be foreigners.

Most of the young gunmen were handsome and fair-complexioned, “indicating they were not toiling under the sun, which could mean they come from well-off families,” she said. —WITH A REPORT FROM JEOFFREY MAITEM