Duterte: I’ll listen only to PNP, AFP on martial law

JOLO, Sulu – President Duterte has said he will ignore the Supreme Court and Congress as he enforces martial law in Mindanao, despite the Constitution giving them oversight.

“Until the police and the Armed Forces say the Philippines is safe, this martial law will continue. I will not listen to others. The Supreme Court justices, the congressmen, they are not here,” the President told soldiers here on Saturday.

“Are they the ones dying from loss of blood, bleeding, hemorrhaging because there is no help, no reinforcement? They’re not,” he added.

The 1987 Constitution imposes limits on martial law to prevent a repeat of the abuses carried out under the regime of dictator Ferdinand Marcos, who was deposed in the 1986 Edsa People Power Revolution.

The Constitution requires Congress to approve the President’s declaration of martial law and limits military rule to 60 days.

If the President wants to extend the duration of martial law, he or she must again get congressional endorsement.

The Supreme Court can also review the declaration of martial law. 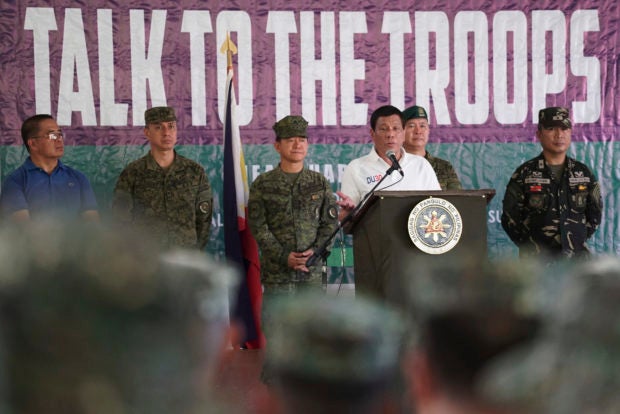 In this May 27, 2017 photo provided by the Presidential Communications Operations Office, Philippine President Rodrigo Duterte, third right, talks to troopers during his visit in Jolo, Sulu province, Mindanao, southern Philippines. Philippine fighter aircraft unleashed rocket fire against militants on Saturday, prompting villagers to hoist white flags to avoid being targeted as the military turned to airstrikes to try to end the siege of a southern city by Islamic State group-allied militants. Duterte recently made a joke about rape as he urged soldiers at another camp in Mindanao to use the powers of martial law to take control of a besieged city in the southern Philippines. (Presidential Communications Operations Office via AP)

“The Supreme Court will say they will examine the factual (basis). Why, I don’t know. They are not soldiers. They do not know what is happening on the ground,” Mr. Duterte said.

A day after declaring martial law, Mr. Duterte described the nine years of military rule under Marcos as “very good,” and said his would be similar.

“During martial law, your commanders, you, you can arrest any person, search any house. There is no more warrant needed,” the President told troops on Friday.

“Warrants of arrest or search warrants should be issued,” the statement from the government’s information agency said. “No person may be arrested and detained without orders coming from these civil courts.”

Mr. Duterte has overwhelming support in Congress, which is widely expected this week to endorse his declaration of martial law.

Albay Rep. Edcel Lagman on Sunday warned of a “constitutional controversy” should the leaders of the House of Representatives and the Senate insisted that they did not need to hold a joint session to review the martial law declaration in Mindanao.

According to the opposition lawmaker, only a joint session would “validate” the position of each member of Congress on whether he or she votes for the acceptance of the President’s martial law proclamation.

“One member, one vote,” Lagman said over dzBB, insisting that it should be Congress “voting jointly.”

Lagman insisted that the failure of Congress to sit in a joint session would be a violation of the Constitution.

House Majority Leader Rodolfo Fariñas Jr. said the House would convene into a committee of the whole to allow lawmakers to tackle Proclamation No. 216 on Wednesday.

Fariñas said the committee would consider the President’s report on his action and would decide whether it would “move for the revocation of the proclamation.”

“The position of each legislator may be expressed in the sessions of the [House of Representatives] and the Senate when they separately consider the report of the President. If either House finds that there is no need to revoke the martial law proclamation of the President, a joint session may not happen,” he added.

The Executive Department and security officials will brief the House on the current security situation and why the President was compelled to declare martial law.

The Senate will have its briefing today.

Lagman also said that the discussion of the President’s report on Wednesday should not be in executive session, and the public and the media should be allowed to listen.

Fariñas earlier said the briefing and discussion would be done in executive session as the report could contain sensitive information.

According to Lagman, it is not a committee of the whole that the Constitution directs Congress to convene, but a joint session.

“If anyone would file a petition challenging the factual basis of the declaration of martial law, because the Supreme Court has jurisdiction over this, it can include the issue of dereliction of duty of the leaders of the two Houses of Congress,” Lagman said. —REPORTS FROM AFP AND NIKKO DIZON