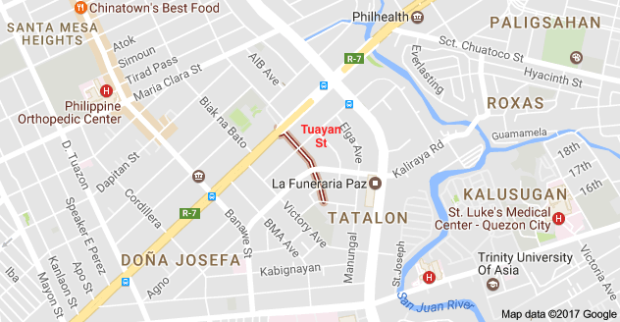 MANILA — A still unidentified robbery suspect was shot dead in a shootout with Quezon City policeman along Quezon Avenue.

A report reaching Chief Supt. Guillermo Eleazar, Quezon City Police District director, said the suspect, identified only as alias Carlo, was gunned down by members of the QCPD Station 11 policemen around 11 p.m., Saturday, after he attempted to rob a man along Quezon Avenue, near the corner of Tuayan St., Barangay Tatalon.

Eleazar described the suspect to be of medium-built, around 29 to 35 years old, and  5’6” to 5’9” tall. He had brown complexion with the tattoo “Estella batch 2004” on his right thigh. He remained unidentified on Sunday.

Prior to the shootout, Supt Christian dela Cruz, station 11 commander, said a man was with his friends on Banawe St., at the corner of Quezon Ave. in Barangay Manresa when Carlo, riding a motorcycle, stopped near them, introduced himself and asked for help, pretending to be lost. Carlo’s targeted victim was typing on his cellphone that time, the police said.

Dela Cruz told the Philippine Daily Inquirer that Carlo suddenly “forced” the man with a cellphone to ride his motorcycle. He then ordered the victim to place his cellphone in the suspect’s bag where his gun was placed.

Carlo was wearing a helmet all throughout, Dela Cruz said.

While traversing Quezon Avenue in front of the Sto. Domingo church, Carlo then  ordered the victim to get off the motorbike or he would kill him.

The victim got off the motorcycle but he grabbed Carlo’s jacket before he could speed away, causing a commotion that prompted Station 11 patrolling officers to respond. The robbery victim was already asking for help that time, Dela Cruz added.

When the police accosted Carlo and the robbery victim, Carlo pulled out his gun and attempted to fire at the cops who then retaliated and wounded Carlo, Dela Cruz said.

Carlo was rushed to the Delos Santos Hospital where he was declared dead on arrival.

Dela Cruz said there had been similar cases of kidnap-robberies by motorcycle-riding gunmen.  In other cases, gunmen snatched their victims, telling them they had unpaid debts and brought them someplace far where they were robbed.

Eleazar commended the patrolling cops for their vigilance and alertness in responding to the robbery.  SFM