Duterte has no time for ‘misguided’ comments vs martial law – Palace 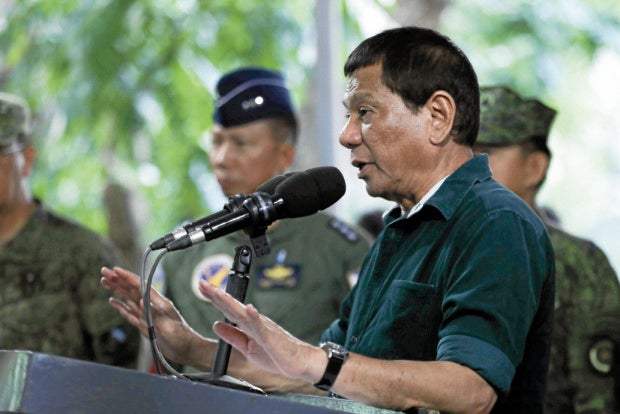 MANILA — As senators are to be briefed on Monday by defense and security officials tasked to justify President Duterte’s declaration of martial law in Mindanao, Malacañang has made it clear that the Chief Executive has no time to entertain “misguided commentaries from critics” as he is focused on stopping the terrorist threat in the region.

“The President’s focus is on addressing the terrorist threat in Mindanao, not on the misguided commentaries of critics,” presidential spokesperson Ernesto Abella said on Sunday.

“He is committed to succeed in this mission and to restoring peace and order so that people throughout Mindanao can fully participate in our nation’s development,” Abella said in a statement.

Apparently, the Palace too is focused on making sure it could communicate accurately and immediately about the government’s offensive against the Maute Group which has been battling government forces since attacking Marawi City last week.

The executive branch is also seeking to inform senators about the necessity of martial law in Mindanao and is scheduled to give them a security briefing on Monday (May 29).

“Senators can ask questions addressed to the martial law civilian administrator (Secretary Lorenzana) and the implementer (Gen. Año) about the report and details of its implementation. By pursuing the questions we have in our minds, we will be guided accordingly in forming our opinion as to the political and legal issues concerning the martial law declaration,” Pimentel said in a text message.

Prior to Monday’s briefing, Pimentel was scheduled Sunday night to meet with members of the Senate majority bloc to thresh out the President’s report to Congress in justifying his proclamation.

But Sen. Antonio Trillanes IV insisted President Duterte did not have any justification for extending martial law beyond Lanao del Sur since he said there was “no single incident cited that occurred” outside of Lanao del Sur. He added that presidential peace adviser Silvestre Bello has assured the Communist Party of the Philippines and its political arm, the National Democratic that the New People’s Army would not be targeted.

“I would push first for the joint session so the proclamation could be deliberated and decided on in accordance with the Constitution. Then I would surely vote for its revocation,” Trillanes said in a text message.

Sen. Francis Escudero, in a radio program on Sunday, said he would clarify with Año and other officials their earlier statements that under martial law, authorities could arrest people without warrants, close down media organisations and take over media.

“Maybe they are not familiar with what is written in the 1987 Constitution,” Escudero saying that he was concerned with defense officials’ statements that under martial law, authorities could take over media automatically.

“There are situations that they could do that and only under the period that this was needed because freedom of expression does not stop as guaranteed by the Bill of Rights. Even in the middle of martial law,” Escudero said.

In the same program, Sen. Panfilo Lacson emphasized the need for other branches of government to guard to against “potential abuses” in the implementation of martial law.  He expressed concern over Ano’s statements that authorities could take over public utilities and private entities as Supreme Court had already ruled against such actions.  SFM